I'll do my best to try to recap our evening into morning, but suffice it to say it was fast.

We got picked up at Salmryia to head to the airport, and it was crazy busy. Thankfully Paige was already there when we arrived, and after a quick meet-up we got 'stamped' in for our flight (how they approve it I guess). Next line was passport control - kinda long, and very busy. After we managed to make it through those lines, it was time to grab some food. Also a bit of a challenge in this airport. You order, and then you go to another counter where you have to jam together to try to give your receipt ticket to a cook guy who takes it back and gets it together. Not very efficient at all, and was NOT a fast process.

While we were still getting food, our gate call occurred, so off we went to the gate for another check-in line before the waiting area and our shuttle bus to the plane, a new 737 that reminded me of a Southwest plane. On our bus ride to the plane we shared with the locals our success in the newspaper - apparently our work in Education City had made the Gulf News and The Peninsula, including a very large color photo of our group in one. One guy we talked to in broken English (and a few other confused people) could not believe we had made it in the paper. I think they thought we were celebrities.

The plane for FlyDubai was very nice, but full. Our ride was short though, only 45 minutes max before we touched down in Dubai!

We all quickly ran to passport control (free for the first 30 days for US citizens) and then to the exit. Along the way we decided to see if our hotel had a free shuttle, and Grace did a great job of getting that called and arranged for us from another terminal. A few of us taxied over and made it to the hotel for check-in, and boy were we impressed. The rooms were honestly spectacular. Big, multiple bathrooms, nice middle meeting space, and the beds were just too comfy. My room had myself, Christine, Jacqueline, and Paige - the others were in the other large room we had. 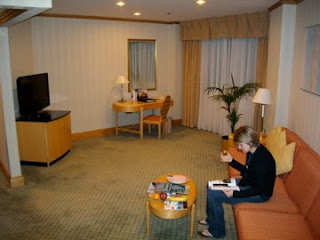 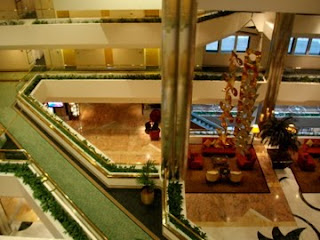 The funny story from this part of the adventure was our food order (since Paige was hungary and we were a little bit). She called down to room service since everything else was closed and when the order was finally placed, the nice gentleman on the other line referred to her as "Ms. Bakken" to confirm her order. She played along so as not to confuse the guy, which of course got a chuckle out of the rest of the group when we had a quick team meeting before we slept.

All I know after that is when the food was gone and we were all in bed, it didn't take long to fall asleep. We awoke to buffet breakfast in the lobby (included) which was fantastic. Full spread, made to order omelets, bread, cheeses, meats, etc etc. After a quick bite, we met our cabs at 7:30 and it was off to the Burj! (and hope that we could get our tickets to go up right away)

Continued in the next post...
Posted by Rich Bakken at 2:30 PM