The Friday recap - into the night

I will do my very best to give a recap of our safari experience, but I think it will be hard to put into words. We met at Education City to split into our groups per vehicle, with the intention being to have each vehicle be a different type of experience. Not knowing exactly what the experience was going to be initially made this a little tricky, but in the end some vehicles were labeled as “extreme” to “moderate”. I ended up in the lead vehicle with our driver Ali and our translator/guide from Qatar University, along with Susan and Beth.

From Education City we set out to the southeastern region in Qatar, where roads turn into sand and dune bashing fun. We made a brief stop on the edge of the dunes to release tire air and take a few pictures, and then it was off to the dunes! Our drivers were very experienced – Ali has no fear. Even though I think we were in a ‘moderate’ vehicle, what they were able to do with a Toyota Landcruiser was pretty impressive. Up and down the dunes we went, sometimes sideways, sometimes forward, and even one time backward.

One fun stop we made in route was up on the top of a very high dune, overlooking the Gulf and showing us a checkpoint and mountains in the distance looking into Saudi Arabia. You’re not allowed to enter Saudi without a visa, and women are not able to enter without being with a man, but it was still a nice view from which to look over. 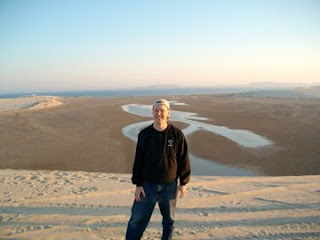 One other neat aspect of these dunes were the retained lakes that we encountered...in the middle of the desert. :) 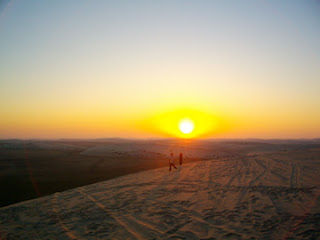 By 5:30pm we made it to our destination, a camp set up for overnight visitors right on the Gulf. While we were told this experience would be close to ‘roughing it’, it actually was very well laid out for visitors who don’t really know how things go in the desert. We had three large tents that were ours to divide space in, a large meeting area with tables and chairs, a fire pit, and even a building with toilets in it (although if you ask, most here would tell you those probably were the most scariest toilets you would have ever seen or tried to use). The tents had mattresses and pillows for us to use, and we were also provided sleeping bags (although those could probably be more classified as sleeping ‘shells’ because they weren’t at all insulated). A BBQ was prepared for us to eat, and soon afterward various groups took to playing games in the tents and partaking in a bit of shisha. Plus...there were camels for riding! 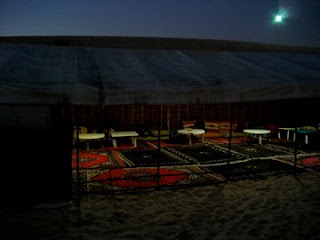 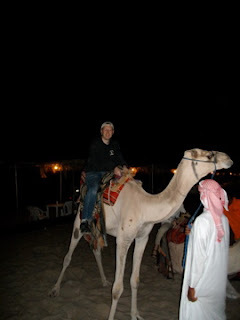 Then, it was time to sleep. Now, normally this wouldn’t be such a problem, except that it gets kinda cold in the desert. Most of us defined cold as long sleeve shirts and a sweatshirt, but what we should have defined it as instead was several layers of shirt and maybe a light jacket with a hood. It was COLD overnight. I don’t get cold very often, but even I was cold. I woke up sometime in the middle of the night, and was shivering so bad I must have shivered myself awake. Since I was up anyway, I got out of the tent and took a short walk…and was amazed by the number of stars I was able to see. Being always in large cities, it’s often hard to see the stars. Not out here. I wish I could have taken a picture because it is something I wanted to make sure I wouldn’t ever forget. After my walk, though, it was back to the cold tent. I tossed and turned in and out of sleep for the next bunch of hours until it started to get lighter and the sun began to rise. Several of us took the opportunity to get up and take some beautiful shots, as well as get in the water. 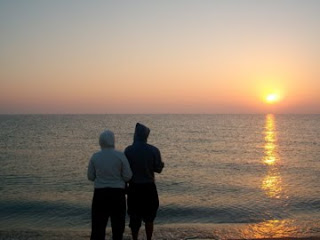 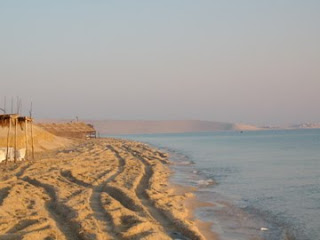 Continued in the next post!
Posted by Rich Bakken at 12:14 PM