I've had a fair amount of success booking trips, whether it be standard paid tickets or mileage redemptions.  In fact, I chalk up the trip 'round the world using miles on Etihad and American to be one of my all-time favorite experiences since it went so well (that booking required calling the Australian call center for American Airlines via Skype to book a pre-devaluation business class mileage redemption since the US call centers weren't able to book space).

For this trip, we decided to go with a normal ticket since prices were relatively cheap for the value.  Finding connections to Sofia, though, is a bit of a challenge.  It's not a large airport and does not have an extensive flight portfolio via the US.  Star Alliance has options via Lufthansa or Swiss but connection times are awkward.  OneWorld is also possible via British Airways or Qatar; SkyTeam has cheap options via Paris and Amsterdam (though both of these options are out of our typical mileage accrual and status plan).  I even looked at connecting via Italy using Aegean or Adria though the prices went up significantly.  In the end, Star Alliance won out with a two-connect via Zurich and Vienna by Swiss and Austrian - not bad!

Or so I thought.

My first booking attempt via United.com gave me the standard "partner booking" notification which in the past clears within 30-45 minutes.  I wasn't worried, since a similar itinerary with Austrian went through a few months ago with no problem.  Except this time after a few hours the flights had not confirmed.  I thought a call was prudent.

The first agent I spoke to was very nice - she said it was the normal delay and that I should call back the next day if I saw any issues show online.  Ok.  By the next morning, there still was no change but after another hour the Austrian segments went missing. (!) - Call #2 on tap.

Call #2's agent was also helpful and rebuilt the original itinerary with all the segments, except I was told there was a conflict with one segment not having a correct booking code for the reservation rules - after some back and forth she was able to change the flight to one that matched and worked better in the timeline.  All was back to normal for the time being and I was told to wait another day (and they took my credit card for the second time) - I was also told that it was up to Austrian to confirm these segments and if they didn't the reservation would cancel.

The reservation was still not confirmed the next day.  This time I thought it best to call Austrian directly to make sure they were seeing the same thing.  Before I did, though, I logged in to check the Austrian PNR which showed all flights as confirmed.  Why wasn't United showing the same thing??  I talked to a very nice Austrian agent who got very agitated when I answered that yes, this was a United reservation and they had told me it was waiting for Austrian.  "It's not us, it's United.  Call them back and tell them to confirm it."  Ok!

Back on the phone to United for the 3rd time - this time I must have received an agent who knew what was going on, since she quickly entered my info and credit card (for the 3rd time!) and I had a confirmation in my email within 20 minutes.

Moral of the story: call back until you get the right person if you don't see a confirmation via email!

Posted by Rich Bakken at 2:52 PM No comments:

Delta Passenger Rampage in the Air

Not a Bridge I'll be visiting

Ask Alexa for your travel updates

Posted by Rich Bakken at 2:11 PM No comments:

We all knew this was inevitable - Starwood and Marriott are combining their rewards programs.

Now the details are out.

I'm a loyal Hyatt member, though the property footprint is not as vast as Hilton or what will be the new combined Marriott program.

Gary has a great analysis here.  In general it looks pretty good for redemptions though earning may be challenging.

I don't anticipate moving away from Hyatt at this point but I like keeping my options available for points.

Posted by Rich Bakken at 5:22 PM No comments:

Next weekend I'll be making my first trek via flight to North Carolina for Ivy+ meetings at Duke.  It will be my first time visiting the Duke campus and also my first time flying through Raleigh-Durham Airport - I've always seen quite a bit of traffic about this airport and the flight frequencies from Newark are substantial.

Here's hoping the weather cooperates since I've seen a lot of storms down south (somewhat tied to all of the April snow happening in the Midwest).

Has anyone else flown through RDU recently?

Posted by Rich Bakken at 2:15 PM No comments:

How exactly does winning a bracket pool equal travel?  Well, in the case of our home bracket the bet for top score was being able to pick the next trip anywhere with no questions asked (I know, we're weird).  So when the final buzzer sounded on Villanova's win over Michigan, I did a happy dance - trip planning for me!

Where to go...so many places!  Zurich? Oslo?  Longyearbyen???

The good thing is that Labor Day weekend flight prices in the US are outrageous right now and international are quite reasonable: 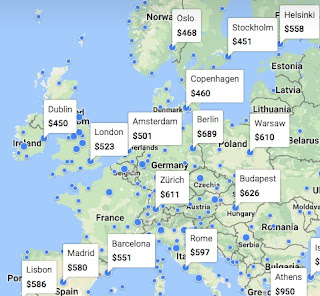 After much work kayaking the river of fares, the choice has been made: Sofia!

More info to come on the booking process (which incidentally has been a bit crazy)...

Posted by Rich Bakken at 5:22 PM No comments:

One of the best all around values for credit cards has been the Chase IHG Visa - this card gives you a variety of perks (including status) along with an Anniversary Free Night good for any property within the IHG portfolio.

That is until now.

Gary is reporting via a user that the Anniversary Free night has been devalued only for properties under the 40,000 point threshold.  Ouch.

You can find a list of the properties where it won't work here:

At only $49 for the annual fee, this card was in my portfolio for the value it brings at overseas properties.  Looks as though I will be searching for another option!

Posted by Rich Bakken at 5:29 AM No comments:

Happy Easter to all!

This weekend was a 'pseudo'-travel weekend which took us on the road up to Providence and back again for church this morning.  Was great to visit Mark and Beth and be back near PVD.

Hope everyone travels safely if you're on the road - April is here!
Posted by Rich Bakken at 12:31 PM No comments: