The rest of Dubai Thursday 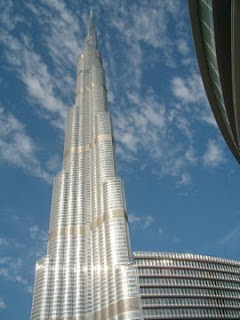 After meeting up with our taxi's, our first stop was the Burj Khalifa! At a little over 2700 feet, it is now the world's tallest man-made structure ever built. Having been in Chicago during the reign of the Sears Tower, this was special for me to be in the place where the newest tallest building is. We were looking very much forward to seeing it!

We tried to get tickets ahead of time (since they have an educational 'hour' in the mornings), but when we arrived and showed them our email correspondence, they turned us away. Apparently the only way to get tickets right now is to actually show up to the Burj and get them onsite. Paige took the lead and tried to convince them about where were from, and showed our print out, but to no avail. And, as luck would have it, they were sold out until the next day at night.

Thankfully, they have a "rush" ticket you can buy to go up the tower if you don't have a reservation, but you just pay more. Even though it was a tad bit more than any of us really wanted to pay, hey, it's the tallest building. And it's in Dubai. And we're here now. So I guess we better just go up the thing. :) And so we did! Honestly, the pictures pretty much say it all but don't do it justice (it did remind me of being on the Sears Skydeck though): 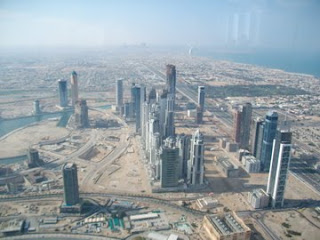 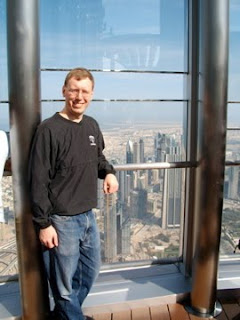 The elevator trip was fun too...140 floors in one minute. I think they said 40/m per second. And yeah, you could kinda feel yourself moving a little up there. :)

After our experience up, our big group broke into some smaller teams to visit the rest of the city. Some chose a bus tour, but a small group of us decided on a hired cab tour instead, since it seemed cheaper and we could stop along the way whenever we wanted. Khalia offered the suggestion of her driver from the morning ride, and so after a quick phone call we had our ride. We grabbed a quick Fatburger lunch, and off we went with our cab driver Malik to see Dubai.

Dubai reminded me a lot of some of the larger US cities I've been to. While the buildings here are very large and seem to be everywhere, Dubai as a whole feels very western. Large major highways, traffic, everyone in a rush...a bit of a contrast from the time that we've spent in Doha. It really amazed me too how many cranes we saw all over the place - so many buildings. No wonder they have a problem filling them.

Our first major stop was the Gold Souk, next to the famous Old Souk. Even though everyone is pretty much shopped out, it was worth a stop. The only problem were the prices. $8000 for a bracelet??? Um, no thank you. 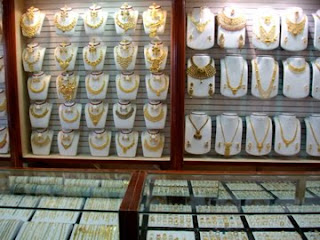 We had to make a quick run back to the hotel to pick up some luggage, so that gave me a chance to get in touch with Ben Artz! He is teaching over here in Dubai, and we were able to connect over the phone to do a meet up near some shops after our hotel stop. Once we got to the smaller shops, I walked outside and here was Ben coming up the walk! It was very nice to chat with him, and was the first time I had met Kate as well. It's fun to have friends all over the world, even in Dubai! 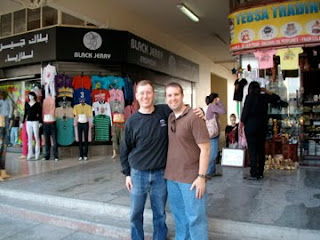 And the shopping was good too...here's "Team Malik": 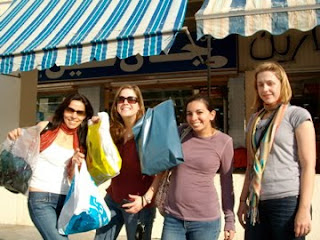 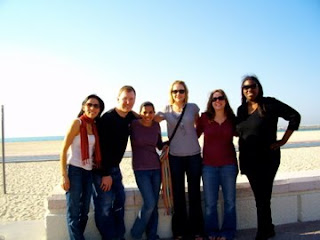 Realizing our time was fleeting, we finished up our last of the shopping and hit the road for the Burj Al Arab, the big sail-looking building on the water that costs a fortune even to go inside. We were able to hop out and take a few pictures. And I learned my lesson about picture taking - don't take one at the expense of a moving vehicle. :) 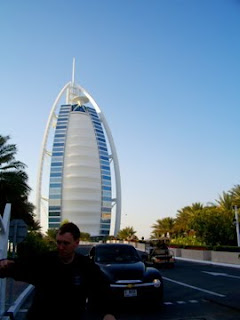 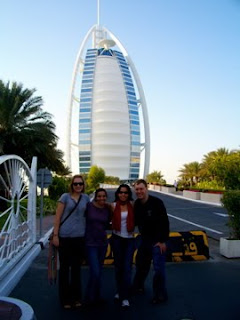 Having a little time left, Malik took us toward the Palm and the Atlantis resort. The island itself is completely man-made and reclaimed, and part of the three major Palm islands in Dubai. The condos located on the Palm are amazing...and also expensive (in the millions). Didn't see a lot of people though...Malik said the recession has hit particular hard here. We did take a few pictures though while we were there, including one with our driver (that will be posted later). Fun time. 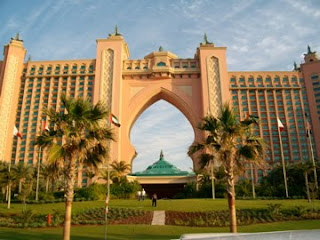 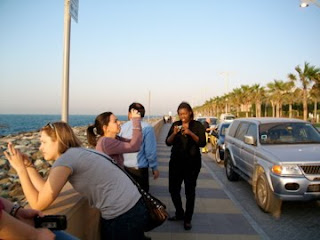 Then it was off to grab a quick bite and to the airport, where our flyDubai plane was waiting for us. The only fun item from our plane ride back were the two guys who sat next to Paige (in the seat that was supposed to be mine but she sat there when the flight attendant told her to) and decided to start talking in Spanish about her and how cute she looked. But when the conversation turned a bit sour, they didn't realize Grace was sitting behind them when she spoke up in Spanish and gave them a bit of a wrangling, which completely embarrassed them and made the whole back part of the plane clap. Those guys should have known better than to be on an international flight and not think that someone might understand what they were saying. Ha!

Quite the whirlwind day, but we all agreed that it was well worth it. A majority of the group though was not looking forward to packing and leaving at 3am. I hope that naps were had by all.
Posted by Rich Bakken at 12:07 AM