One of my best friends passed away last night.  While older now, this was one of the first pictures.  Sad. 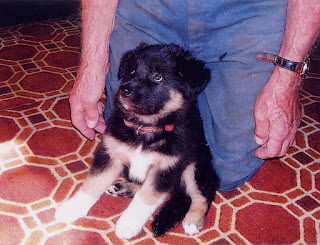 Posted by Rich Bakken at 5:34 PM No comments:

and now the fun begins...

Monday of this week was a big day for me.  It was my scheduled day to defend my dissertation proposal (the gateway to doing research and finishing the program).  I spent the weekend prior in prep and felt confident in my delivery plan.

Success.  I can't really describe how it feels to have passed, and it's taken a few days to really collect my thoughts on it.  Officially being a 'candidate'...being ABD...all of it is just a bit overwhelming.  I am so grateful and thankful for the love and support from so many people to help me get to this point.  I can't possibly name everyone who has been a part of it, but you all know who you are.  I am blessed to have an awesome committee, and a Chair that has been very supportive and excited about my topic.  And I'm also thankful for the support I've received from work and the encouragement from so many to keep working hard.

All of this really puts things into perspective - I'm thankful for so many blessings that the Lord has provided, and am really excited about what the future holds for my research.

Yes, you just read that correctly - a commercial pilot suspected of committing murder stole a plane...not the smartest thing to do.

Here's the story:  link
Posted by Rich Bakken at 3:30 PM No comments:

Rocking it out in Maine

It's time for another "place of the day" to highlight, and since I've been to Maine before I thought it fitting to showcase for a brief moment the Maine Lobster Festival that takes place in Rockland:

Maine is known for its Lobster - almost 36 million pounds are caught each year.  For 50 years Rockland has hosted an annual lobster festival, full of live music, cooking contests, and even a coronation for the festival.  No matter whether you choose steamed or broiled, you have to try at least one while you visit.  Only 60 miles from Bangor and 190 miles from Boston, the festival is hosted for five days in late summer.  Check out a schedule and more information here.
Posted by Rich Bakken at 3:24 PM No comments:

Cheap flights to Dublin! 1 day only!

Thanks to Flyertalk for the heads up on this one, as well as the Points Guy for more in-depth analysis...

Looks like there are cheap flights to be had to Dublin if you can find them.  The deal is showing as flying on American, US Airways, or Delta between La Guardia, Ohare, (and other cities) to Dublin - Delta fares have been found for as low as $379 roundtrip!  Other carriers are showing in the mid-$400's, which still is a great deal.  Fare rules are from August 26 through December.

This won't last long, so book now if you can find one!

1. Gentleman's Champion: Roger Federer - I continue to be impressed and amazed at Fed's play, and he is so much fun to watch.  His movement on grass is just like what was described on tv: he seems to float.  He had an answer to every big shot, and was the more composed player.  He deserves to be back at #1 and should be considered the best ever.

2. Ladies Champion: Serena Williams - I'm proud that another American has won a major, but I'm getting tired of what seems to be the same ol', same ol' from Serena.  It's true she battled back after health issues, but her play at times seems lackluster.  I'm ready for another woman to step up and claim the crown, without the glitz and glam that are the Williams sisters.

3. ESPN - Gotta say, ESPN, you were pretty awful.  I know you've got the Wimbledon broadcast rights for many years, but you really need to evaluate who you assign to call the matches.  Chris Fowler and Mike Tirico didn't have a clue at times what to say, and pairing them with even more knowledgeable people like Evert or the McEnroe's doesn't help.  You also get a grade of "F" for your initial camera shot of Serena winning - hopefully no one will broadcast it ever again.

4. Directv - Kudos again on your Wimbledon mix.  Was a delight to catch multiple matches at a time.

5. Grunting - was so happy not to have Sharapova in the final - no unnecessary grunting needed.

6. Andy Murray's post-match speech - classy.
Posted by Rich Bakken at 10:55 AM No comments:

not so hot here

I was going to try and come up with a clever post about travel to the Midwest, but given the excessive heat going on there right now it's much better to be in San Diego!  While our temps have been relatively smooth in the 70's, back home they're pushing the 100's and have been for several weeks now.

Things for me have also been stressful along a number of fronts - this week will be in particular, although I may get a lift traveling this coming weekend as I head back east.

I also may try to post a Comic-Con update on how the town is looking later this week as Preview Night (Wednesday) is fast approaching.  In retrospect it's probably why tickets out of here this weekend were so high.  Whoops.
Posted by Rich Bakken at 3:32 PM No comments:

Happy to share I had an article published in the Journal of Learning Spaces!  (My director was a co-author)

Check it out here:

http://libjournal.uncg.edu/ojs/index.php/jls/article/view/384
Posted by Rich Bakken at 12:46 PM No comments:

twas one year ago...

One year ago today (and this weekend) Jimmy and I were just landing and making our way to Gimmelwald, Switzerland - the start of our pre-trip experience before getting to Mondragon, Spain.

You can read all about Gimmelwald here.  And the first day of Mondragon here.

It's crazy to think that a year has come and gone since that trip, which was one of the most relaxing and fulfilling trips I've been on in quite some time.  Not only did we get a chance to get some hiking in, but the leadership experience at Mondragon was second to none.  And then of course there was the tapas.
Posted by Rich Bakken at 6:50 AM No comments: