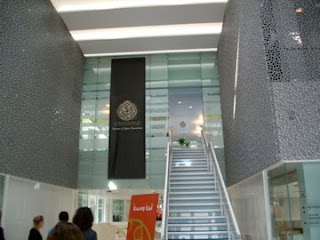 Our group today began our campus visits at Education City with the resident US campuses located there. We were split into two smaller groups, each taking a different section of universities to visit. My group visited Virginia Commonwealth, the Academic Bridge Program, and Georgetown.

Each program is unique within its own right. VCU was the first university invited to participate in the new Education City endeavor, and therefore has had the most experience in operating within the country. Focusing on arts and design with just over 200 students, VCU went to a co-ed campus only three years ago and is now offering an MFA program to its students in Design. The tour of the building took us into many of the teaching spaces, including ceramics, textiles, fashion, and painting. After our tour we met with several of the student affairs individuals from the campus for a Q&A session. I was most impressed by how the campus still operates within its normal US framework (as best as it can) to give the students as much of an authentic western learning experience as possible. At the same time, cultural considerations must always be taken into account (such as the role of women and religion) as part of the process. It’s a balance that often takes quite a bit of work to maintain.

The Academic Bridge Program prepares students to enter the university from many different walks of life, and gives them a foundation from which to entire university as prepared as possible. The counselors we met with, including the Director, were very kind to share their process for engaging the students in a variety of activities. All of them carry multiple responsibilities though, so I got the sense that there is a very important balance that must be maintained for the 300 students that participate. They were also very kind to give us some gifts to take back home, including a folder hand-made in Lebanon that is used for their graduation activities.

A quick cafeteria lunch (which by the way is run by Sodexho) was next, which was very cheap and also very good to eat. I tried the Chicken Marsala, which I found out to be much hotter than I was anticipating. It was very good, though…after you got through the kick on the back end. 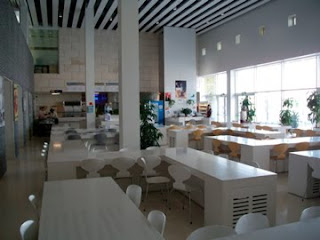 We finished up with a visit to Georgetown, who forgot we were actually coming to visit. After an awkward few minutes, I walked around to see about getting into one of their large lecture spaces. I ran into a very nice individual from the Dean’s Office who let me into the classroom, and I was able to look at their current design and installation. They do a wide variety of teaching in the space, including connecting via video conferencing when needed. I was additionally introduced to another member of the Dean’s Office staff, who was kind enough to discuss their current distance learning opportunities offered to the students.

After meeting back up with my group, we went on a full tour of the Georgetown rooms, and I was able to snag some pictures of their high-end video conference space, the RPX room. They continually connect back with the main DC campus for a variety of activities and student organization events that I found fascinating for student involvement. 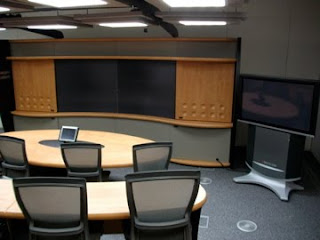 Our final activity (after another visit to the cafeteria for a made to order cheeseburger!) was sitting in on a taping of the Doha Debates. Staged before a Qatar audience, the debates focus on a singular controversial motion with two speakers against, and two for. Discussion ensues, followed by a Q&A session with audience members before a final audience vote is tallied. Originally, I had planned to just sit in the green room and observe, but we ended up being able to go in to the taping when additional seats were available. Sara and I happened to get two final close seats in row 2, which after the program began, ended up being the area where EVERYONE was asking questions. We’re fairly confident we made it on TV…sitting right behind us was the Ambassador to Qatar from Afghanistan who stood and asked questions, and the lady in front of us was told by the producer that she was going to be on TV and she should make sure she keeps her legs closed. I even got poked – right in the middle of it, the girl next to me pokes me. I look over and she points her finger over to the mid-seat camera guy who looks right me and motions me to move in my seat forward for some reason. Either they were angling up for a shot, or moving me out of the way. Either way…pretty sure we’re on there.

So…if you care to see what we sat in on, the airtime info:

For those who don’t get the BBC, it will also be on the web or for podcast:

More of the same fun tomorrow.
Posted by Rich Bakken at 12:13 PM