Travel to the east restricted

Thoughts are prayers are certainly with all of those displaced or being affected by the aftermath of Hurricane Sandy on the east coast.

If you're planning on traveling toward New England or other parts east, you may want to revise your travel plans (at least for now).  La Guardia, JFK, and Newark airports are still closed as of this morning per Flightview, and other airports such as Washington Dulles and Boston Logan are showing very few if any flights arriving.  Make sure to check ahead of time if you're on the docket to fly to any of these areas.

Flightaware.com has also been compiling information about airport status.  You can find the link here, but a summary of the info (as of right now):

6,047 flights cancelled so far today. Most affected is still Philadelphia with with 1,085 cancellations, NYC airports have nearly 1,000 each. We expect more cancellations to happen, especially in NYC, soon.

Only 635 cancellation so far tomorrow (Wednesday). We expect this number to rise once damage can be assessed and re-open times are communicated.Airport-specific updates:

IAD Open/operational, expecting flights from Delta and foreign carriers.
Posted by Rich Bakken at 8:12 AM No comments:

Back to work today, but I wanted to make sure to do a quick recap of the International Leadership Association conference that was held in Denver this past weekend.  This was my third trip to ILA, and second where I was presenting, and it once again was very informative and busy.  I only wish I could have been there longer!

My friend and colleague Jimmy and I presented our paper and research concerning Leadership, Adult Development, and Tension.  You can find the abstract and information below:

This was a topic that we worked on through our experience in an Adult Development class, and were very proud to have proposed an addition to Kegan's "I" stages.

Looking forward to attending next year's conference in Montreal - my plan by then is to present my dissertation research!
Posted by Rich Bakken at 8:44 AM No comments:

Qatar Airways to expand in the US

Looks like something is going right - the CEO of Qatar Airways today announced an increased presence in the US.  From the USA Today, here is a snipit:

Qatar Airways' current U.S. destinations are New York JFK, Washington Dulles and Houston Bush Intercontinental. The carrier also announced it will begin flying to Chicago O'Hare this April.
"After Chicago, we are going to start operating three more destinations," Al Baker said. "This will be Atlanta, Detroit and Boston."

I'm interested in seeing how this affects American's bankruptcy proceedings, if at all.  From the outside, it seems as though more options to the Middle East will be opening up.  Yay!
Posted by Rich Bakken at 8:12 AM No comments:

Just crossing the wires this morning, it sounds like Singapore Airlines will be giving up the title of flying the longest commercial route non-stop (currently Singapore to New York).

This was one of those flights that a lot of flying and points enthusiasts talk about, simply because you can get there without stopping and having to connect in all sorts of other cities (Moscow, Seoul, etc).  And, if you have enough points (or $), Singapore's product in business and first class is top notch.  I don't think I'm going to have the chance to fly the route before it stops (saving for the Maldives), but I'm hopeful that SIA will bring it back with some other option.
Posted by Rich Bakken at 8:27 AM No comments:

I'm so glad that it is Friday...thank goodness.
Posted by Rich Bakken at 10:48 AM No comments: 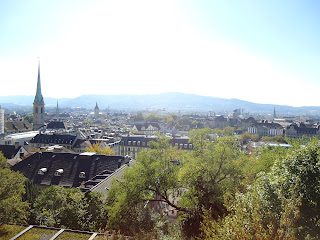 I certainly enjoy visiting Zurich - typically I try to make a good effort to get there whenever my travels permit, and I'm never disappointed by the feeling I get walking down the Bahnhofstrasse near the Sea of being in a calm, yet energetic environment. The trains are efficient and always on time, and it's easy to walk to any location you need.

So, I thought it was ironic that Zurich was chosen place to highlight by the Points Guy today - you can read his review and update on places to stay here.

Definitely would recommend the Park Hyatt if you can swing it - points may be your best option!
Posted by Rich Bakken at 1:04 PM No comments:

This today from the AP and USA Today (and honestly, I couldn't believe it when I read it the first time - what would possess someone to do this?):

LOS ANGELES (AP) - Why would a man flying from Japan to Boston need to wear a bulletproof vest and travel with a suitcase full of weapons, leg irons, a smoke grenade, a gas mask and a biohazard suit?

That's what federal investigators are trying to figure out despite a lack of cooperation from 28-year-old Yongda Huang Harris, who was arrested during a stopover at Los Angeles International Airport, U.S. Immigration and Customs Enforcement officials said Tuesday.

Harris, who was taken into custody at the airport Friday wearing the vest and flame-resistant pants, was not cooperating with federal officials attempting to interview him, according to a U.S. official who spoke on condition of anonymity to discuss an open investigation....
Posted by Rich Bakken at 3:29 PM 1 comment:


Yes - it seems as though it is now official:

Much speculation has abounded about whether or not this would actually happen, given the denial of any such rumors by Qatar Airways' CEO in recent weeks.  But it seems as though it is official...and even though it will take 12-18 months to be finalized, this has great travel implications.

If you've been saving up your British Airways or American Airlines miles, you will potentially be able to use them on some fantastic routing to the Middle East and Asia (including India, Qatar, and the Maldives!).  I'm interested in seeing how the mileage charts work out, since Qatar Airways' business class product is top-notch, and there are direct options to Doha from Houston, JFK, Dulles, and others.

I also wonder what the other airlines in that area (Etihad and Emirates) will do...

Posted by Rich Bakken at 2:44 PM No comments:

Departing is such sweet sorrow 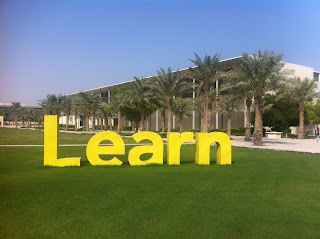 In a few hours I will hit the road for the States, my time here in Doha doing data collection for my dissertation complete.  I am so very thankful to Cyndy and her family for hosting me the entire time I was here, including our Canadian Thanksgiving we had last night.  Since this year I'll be out of the country for Thanksgiving, it meant a lot to be a part of the celebration here with the family.  I couldn't even begin to try and come up with something to repay the kindness and hospitality.

This has certainly been a learning experience for me, and one that I will never forget.  I only hope that my analysis and writing will do justice to the amazing educational opportunities that are being experienced here in Doha and Education City, and to the students who are ultimately making it all happen.

Posted by Rich Bakken at 1:23 AM No comments:

Not having much fun packing right now (bringing back more than I came with, and that's ok).

And it looks like someone doesn't want me to go...either that or its the warm sun.  Ha. 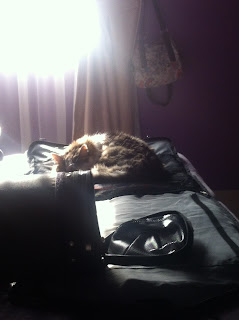 Posted by Rich Bakken at 5:42 AM No comments:

I must admit that I do enjoy eating grilled cheese sandwiches.  And since it's a featured highlight from today's update from Food and Wine, I thought I'd just have to share some of their more interesting takes on this classic:

My first of the list to try (hard to choose only one, honestly): Tomato, Prosciutto, and Gruyere

I bet it would go nicely with my famous eggs...
Posted by Rich Bakken at 4:56 AM No comments:

My last day of data collection.

Posted by Rich Bakken at 9:06 PM No comments:

I had to sit here a minute in a bit of shock as I contemplated that this is my second to last day of official research for this trip to Education City.  The time has flown by (as I was told it would) and has been overall very positive.  I'm working to finalize my last interviews and access to students, and complete the logging that I've been doing as part of this experience.

Soon this part will be all wrapped up, and I will be on my way back.  I'm mixed though - a little sad to be done with this part, but also happy to be coming back.
Posted by Rich Bakken at 12:26 AM No comments:

In my process of reviewing literature, came across the following today:

The idea of transnational competence for faculty members is intriguing, and I'm not sure is discussed enough.  Are faculty receiving the preparation they need in order to be successful both academically and culturally in the setting they are in?  I'm curious what specific activities could be constructed to meet this gap - is it possible to do without actually being in the culture?
Posted by Rich Bakken at 3:27 AM No comments:

not a bad average

My results today were 2 out of 3 - I had three students on the docket, and the first two showed up on time and were ready to go (early in fact).  The third...no show...no email.  So I attempt to reschedule.  This is pretty much a common theme with how this has gone for me, but I continue on with only a few days remaining to get as many as I can.  I have several interviews planned for tomorrow, including another over in QF.

And other than the occasional issue remembering how to correctly calculate the time difference between here and the states, things go fairly well.  (chuckle) You'd think I'd have it down by now, but I still have to look at the clock and count just to double-check myself.  I'm sure those who have lived here a long time have this down pat.  Why does this matter, you ask?  Well, one of the many things that make me count the hours is double-checking my bank stuff just to make sure none of my purchases get stopped - and inevitably the banks do online maintenance at weird hours.

Congrats to the Packers on the win...the season may yet be salvageable.  Ha.  They play the Colts next week, so maybe they will win again.
Posted by Rich Bakken at 5:55 AM No comments: