Overall the trip turned out very well and weather held for the most part.  Visiting Vienna is such an immersive experience - the cobblestones, the small alleys and passages...all make for a wonderful time experiencing a city that is very welcoming.  Some takeaways:

1. Nov/Dec is an excellent time to visit Christmas markets - so many great things to eat!
2. The Park Hyatt Vienna is worth the stay (points are very reasonable) - the upgrade really made it special
3. Walking the city is just as easy as using the train system - very convenient and easy to visit sites a bit out of town
4.  The more popular restaurants need reservations - give plenty of notice to get the time you want

I really look forward to coming back!

Posted by Rich Bakken at 6:14 AM No comments:

The sun was out and shining for our Saturday adventure, and the subway didn't take long to get us over to a different part of the city and another national treasure, the State Opera House.  We decided a guided tour would be a nice way to view the entire property, and after a short wait and stop of a nearby coffee house we were off.  If only we would have had time to see a show! 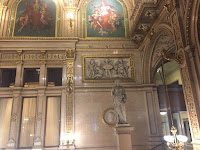 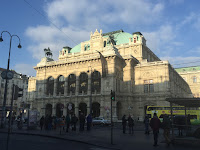 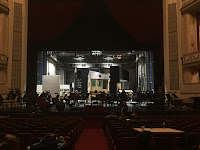 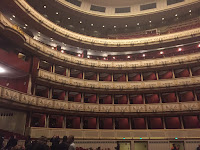 Soon after our tour was complete, we had one more major stop: Schloss Schonbrunn and the famous Christmas Market in the courtyard.  It took us a while to walk through most of the major rooms and sections throughout, and at times it felt as though you were stepping back in time.  I enjoyed seeing the Imperial Apartments the most and much of the ornate furnishings. 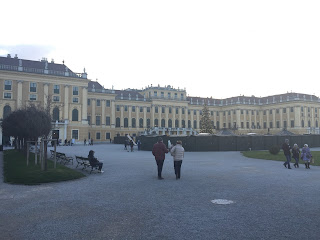 Dinner for the evening was a true Austrian experience, Restaurant Ofenloch.  Another schnitzel try and we came away very impressed (and full).  We were lucky to get a reservation on such short notice - next time, we need to make sure to email plenty ahead.

One last stop at the Am Hof Christmas market and our day was complete!

Posted by Rich Bakken at 5:15 PM No comments:

With just a few days in front of us, we had to make our trip count and see as much as we could fit in before our Sunday departure.  On Friday morning we set out for our first place: The Central Cemetery.

Now you might be asking yourself, why would we go there?  It just so happens to be the resting place for a number of famous composers who made significant contributions to music in a variety of time periods.  I'll let the pictures speak for themselves: 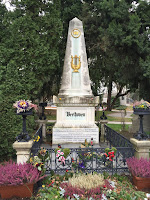 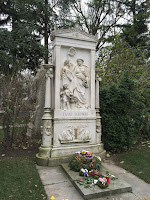 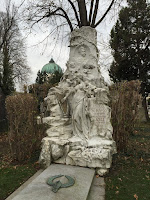 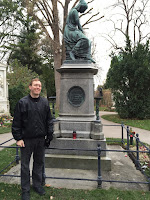 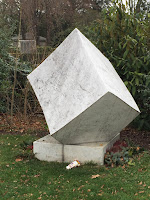 Our next stop was the Belvedere Palace and Museum - the museum boasts an impressive collection from a variety of time periods, but is famous for its collection of Gustav Klimt pieces including "Lovers (the Kiss)".  I couldn't take a picture of the art without having a guard come over and scold, but it was enjoyable to walk through each of the sections and floors.  The view from outside was also beautiful: 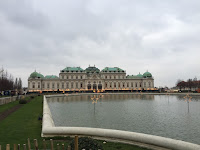 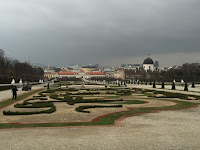 We concluded the evening by walking around the squares near our hotel and stopped in to St. Stephen's Cathedral, an impressive structure right by Stephansplatz. It didn't hurt there was another market nearby and cider to keep warm! 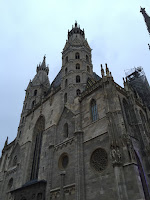 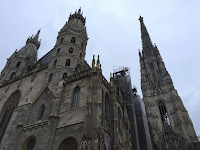 For our Friday evening dinner we scoped out a restaurant that was a bit hidden away from the main square, Brezlgwolb. So much history in these places, we dined in the the lower basement area and had some of the best Austrian white wine ever tasted.  It was so good I went back and bought a bottle to bring home...saving for a special occasion!

Posted by Rich Bakken at 5:08 PM No comments:

Vienna here we come!  I've really come to enjoy the opportunity to travel over the Thanksgiving holiday, and despite some schedule difficulties with American (who cancels flights over the holiday?) we managed to get to Vienna in good shape and with plenty of time to explore our digs for the night and the local eatery scene.

But first...the opportunity to check out the Park Hyatt Vienna!  And I must say...pretty exceptional, and not just because we were able to get a Suite upgrade: 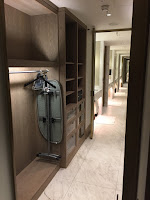 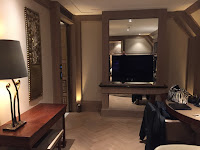 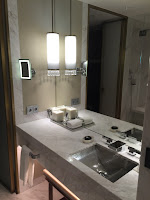 The property is a converted bank building and the architecture alone makes walking throughout an adventure.  You can still see and picture the teller areas and where certain offices used to be.

As an added bonus, we also had a Christmas Market right outside in the square: 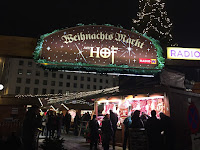 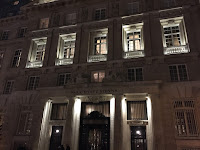 Our restaurant of choice for the evening was Hopferl, located just across the corner from the Hyatt and market.  I had to try the Wienerschnitzel - was excellent.  Happy Thanksgiving!

Posted by Rich Bakken at 4:43 PM No comments:

As reported extensively by most of the bloggers today, including OMAAT and View from the Wing, American Airlines has announced their changes to the AAdvantage program.

And it's not good.  Read the official update here.

Major changes to earning structures, elite mileage accrual, and partner mileage accrual.  Most options for redeeming miles in business and first class will be going up as much as 49% or more.  Here are the general earning points for redeemable miles for each status level:


A $350 roundtrip ticket from Philly to LA would earn 3,850 redeemable miles, instead of 4,802.  So much for spending time finding cheaper flights...

Guess it's time to start evaluating my options for 2017.  I have Executive Platinum status through all of next year, but it will become increasing harder to earn miles for redemptions on American.  I suspect most people will start to credit flights directly to Alaska Airlines (who is a partner with American, Emirates, and others).

Posted by Rich Bakken at 2:02 PM No comments:

2015 Best International Airlines: Which have you experienced?

Via Conde Nast, the 2015 Best International Airlines list has been released:

Which have you experienced?  I would definitely agree with the review on Cathay Pacific and Thai Airways - was very impressed with the overall cabin atmosphere!

Posted by Rich Bakken at 5:59 AM No comments:

I've found great value using Avios for short-haul flights within the US - you can't beat a 4500 point roundtrip ticket with low fees between nearby cities such as Philadelphia, Boston, and New York.  Sadly, all of that is ending - only in North America.

Of course, it bears mentioning that all good deals never last forever.  In this case, British Airways has given until February 2nd until the changes take effect (and all other 4500 awards in any other zone such as Asia or Europe still remain in effect).  Seems to me they became acutely aware of how many of us were using those types of awards...book now while you still can!

Posted by Rich Bakken at 8:32 AM No comments: