I'm not even sure how to spell "uee", or, you-ee, or, that thing you do when you turn your car around on the road. Anyway. However you spell it, I did it yesterday on the 5. It was a weekend of travel (more like day) of travel for me, but after it was all said and done ended up not being too bad.

I had to drive to LA yesterday, and while normally I wouldn't just do something like that on a whim, I had a purpose. I had an interview with the Millenium Momentum Foundation for a scholarship downtown at the Wells Fargo building. I had applied for this scholarship a bunch of months ago, and when I didn't hear back I figured I hadn't gotten it. But, as it ended up, I got an email that said I was a finalist and to set aside Saturday at 11:45am for my interview.

So, knowing that traffic in downtown LA is never good even on weekends, I got myself up extra early and hit the road around 7:15a, figuring I'd hit some traffic and be right on time. What I wasn't expecting was the absence of the traffic. There was none. I also wasn't expecting to miss Exit 3 on the 101 (which I did) and had to drive a whole end past that and do my first "u-e" of the day. After the quick turnaround, I got off on Broadway and headed to the building. Except, I missed the parking garage entrance (since it isn't really signed very well) and because I was on a one-way street, I proceeded to drive around all discombobulated - I had my iPad with me for directions, but navigating the car whilst iPadding the map was a bit tricky and I wouldn't recommend it. After about 15 minutes I found myself driving in a big circle back to Hope St, and to the garage! I had made it. And I had only arrived...2.5 hours early. Lovely.

So now what do I do? The only thing I could do was sit in my car - I had free valet parking, but it had to be validated, so I couldn't go out and drive around. Plus, it just so happened to be 96 degrees outside, so walking around in my suit wasn't really an option either. After locating a restroom, I came back to the car and proceeded to do some of my readings for class this coming week. At least I could get something done.

Soon it was time for me to proceed up to the 54th floor, so after getting briefly lost in the lobby (there are TWO entrances to the building) I head up the elevator and wait for my turn - at this point, it is 11:15. I feel confident, and I'm early.

Except, unbeknown to me, they were running behind. A lot behind. In fact, so far behind that I didn't end up going into the actual interview until 2:15. PM. That would be almost 3 hours past when I was supposed to go. I learned a long time ago that you need to be flexible with these things, and I just kept telling my growling stomach that eventually I would meet the committee and then all would be well. And in the end, it wasn't a bad thing being later - it gave all of us finalists a chance to network and get to know each other. There were students from UCLA and USC, as well as from San Francisco. I had a very nice conversation with the interview panel, and hope to hear back from them soon.

After that, it was time to hit the road. Back to the 101, and then the 5. Except, while I had been up on the 54th floor having fun, the traffic gods decided that it was time to come out and play. The 101 was hardly moving, and when it transitioned to the 5, it got slightly worse. On a Saturday no less. I've got all the luck it would seem.

I was thankful when the stop and go nature of it finally subsided, I grabbed some food quickly off the highway, and was on my way. As I passed Disneyland and Angels stadium, I remember looking at it and thinking to myself about when I had gone up and touched the stadium on my TCW trip to CA, and how much fun we had. As I kept driving and almost got to Oceanside though, it hit me - the White Sox were playing the Angels this weekend! Wouldn't it be fun to go? So...I pulled "u-e" number 2 and headed back north as quickly as I could, traffic notwithstanding.

I found some cheap $5 parking, got myself a good ticket field level 3rd base side, and watched the White Sox win 6-2! Was a very fun time...when I eventually got back, it really had been a super long day. Driving to LA is no fun, except of course for a scholarship. Here's a pic or two of the game! 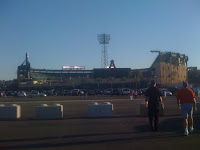 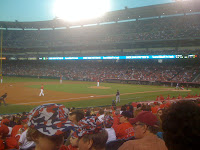 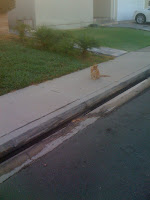 Yeah, there was just something about this that begged me to take a picture. I see all sorts of things when I walk to work in the morning...cars, homeless people digging in garbage cans, and even an occasional solitary cat.

Here's hoping that this week is a tad bit calmer. I've got so much reading to do though, that I'm almost not sure where to start. I guess at the beginning would make the most sense. I wish they'd make a machine that would suck all the reading stuff right into your brain...that would save me a lot of time.
Posted by Rich Bakken at 11:16 PM 1 comment: 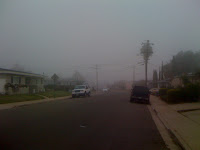 Reminds me of an early Boston morning.
Posted by Rich Bakken at 7:57 PM 1 comment:

Can't think of a better way to pass the time while you're delayed...

Would love to have seen this in person!

The report says that this was the Amsterdam Sinfonietta from the aisles of a KLM 747 flying from Shanghai. The group had just performed in Shanghai, and was heading back home. When the delay stretched toward an hour, members of the Sinfonietta grabbed their instruments and struck up some music.