This post will be a combination of Thursday and Friday, since it took almost 11 hours leaving on Thursday morning for me to get to Seoul on Friday late afternoon.  I had a departure from SAN-SFO that was slightly delayed, which meant a run for the gate when I landed in SFO.  Thankfully my landing gate was near enough to the International terminal that I was able to make it with a little time to spare before boarding doors were shut. 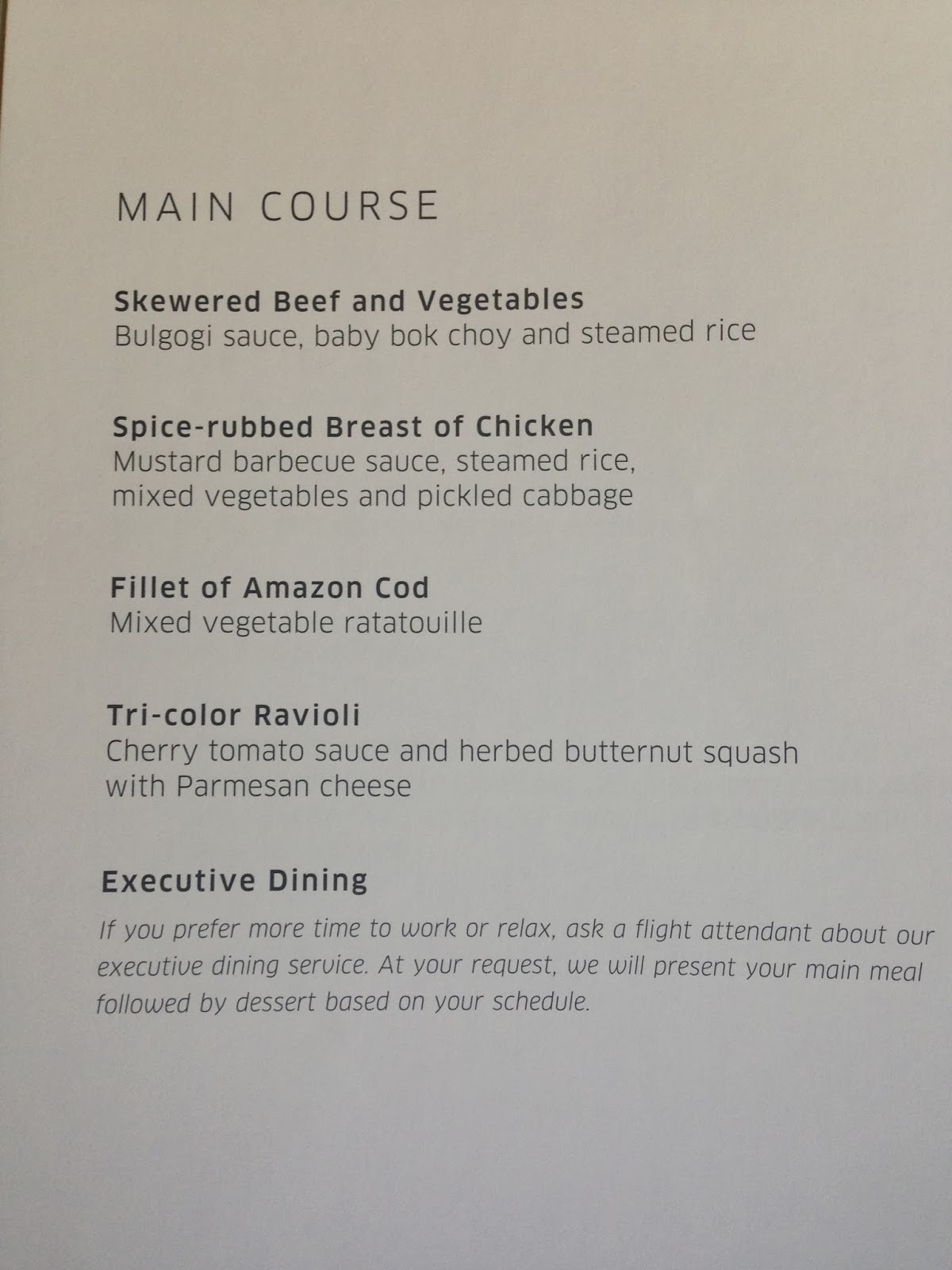 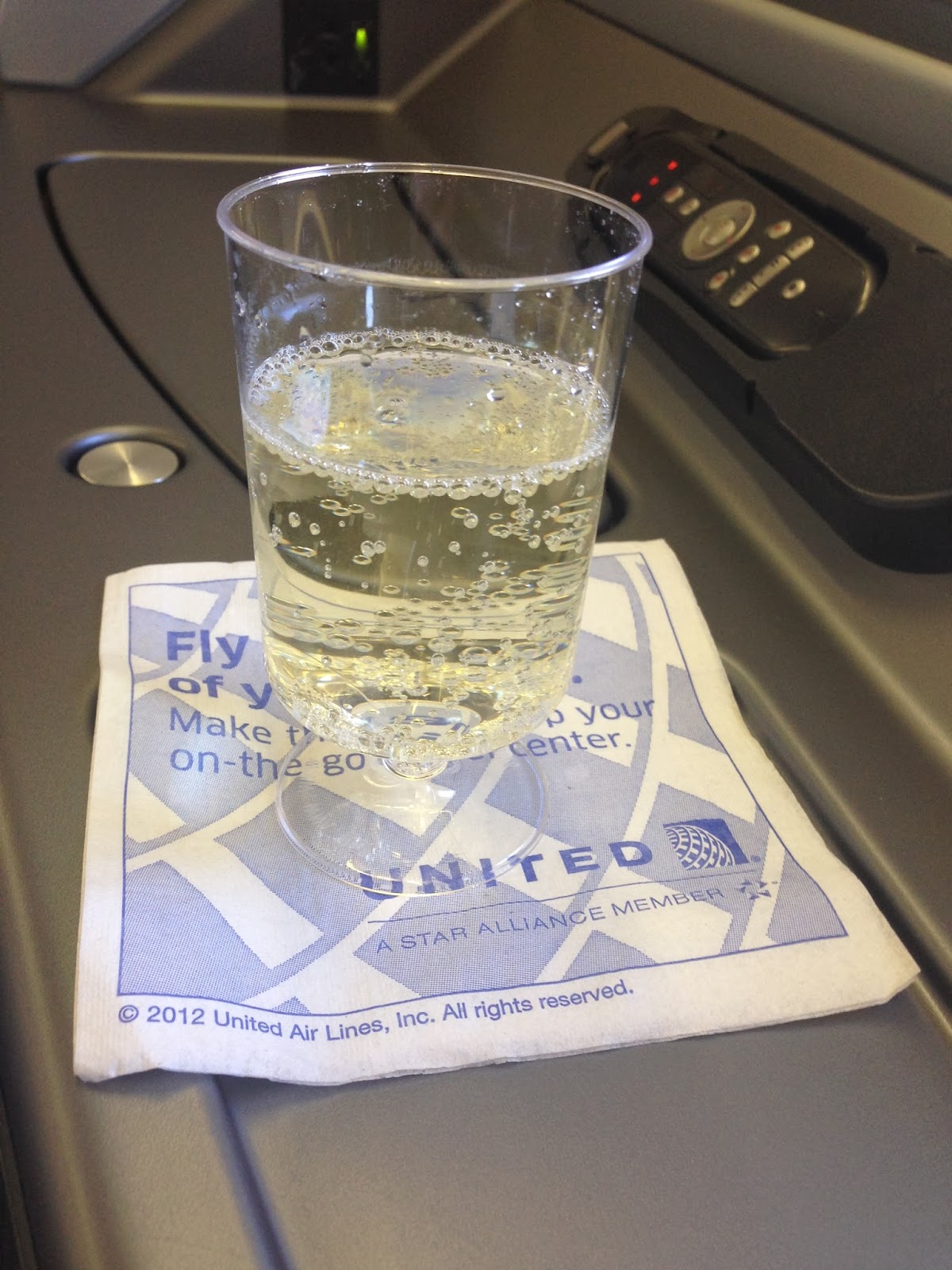 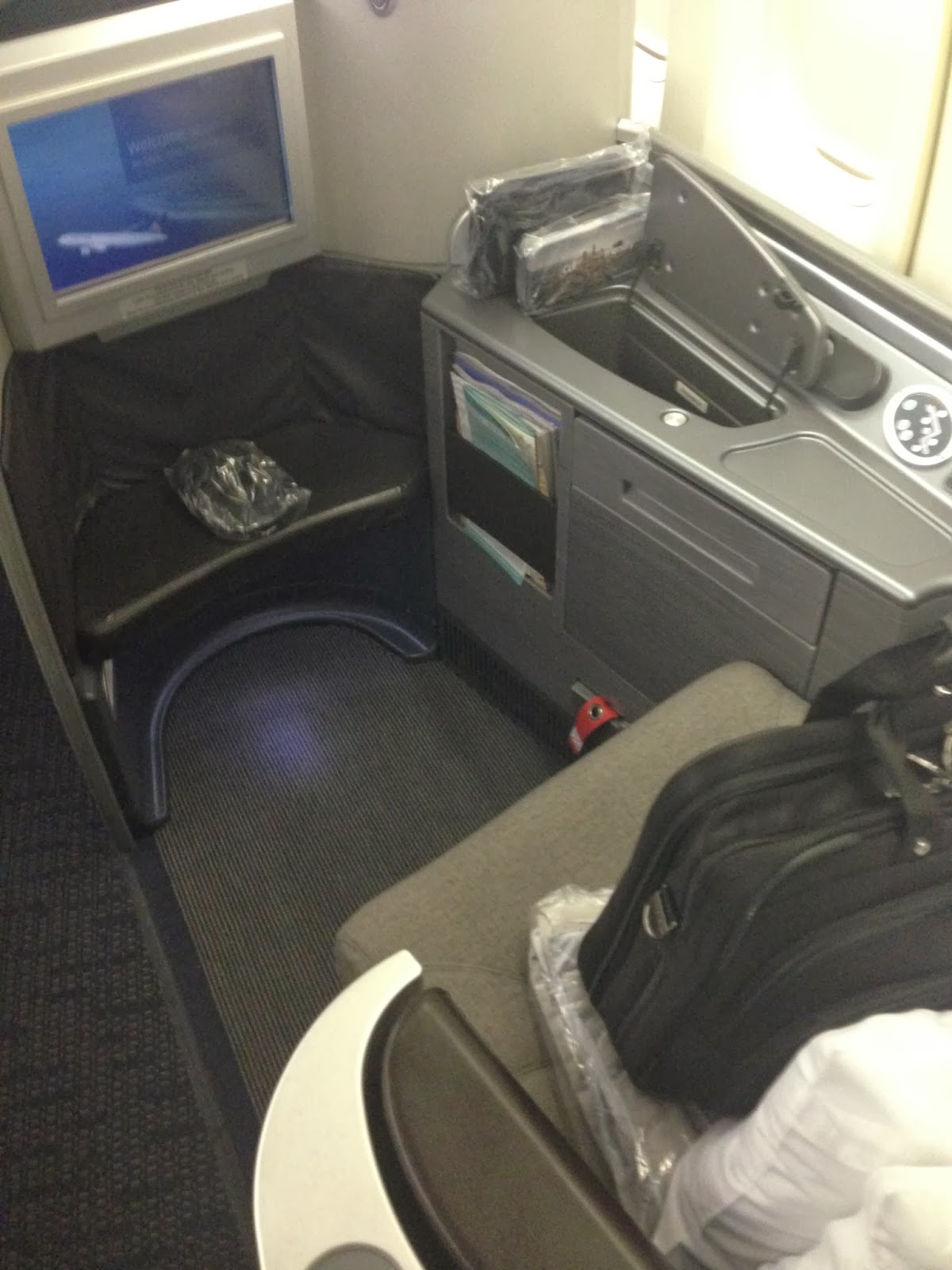 I was very interested in trying out the Global First product on United, and since a mileage ticket option was available, I took it.  The seat was quite nice as you can see from above.  The menu choices, though, were similar to BusinessFirst.  And of course, the wine and champagne were excellent. 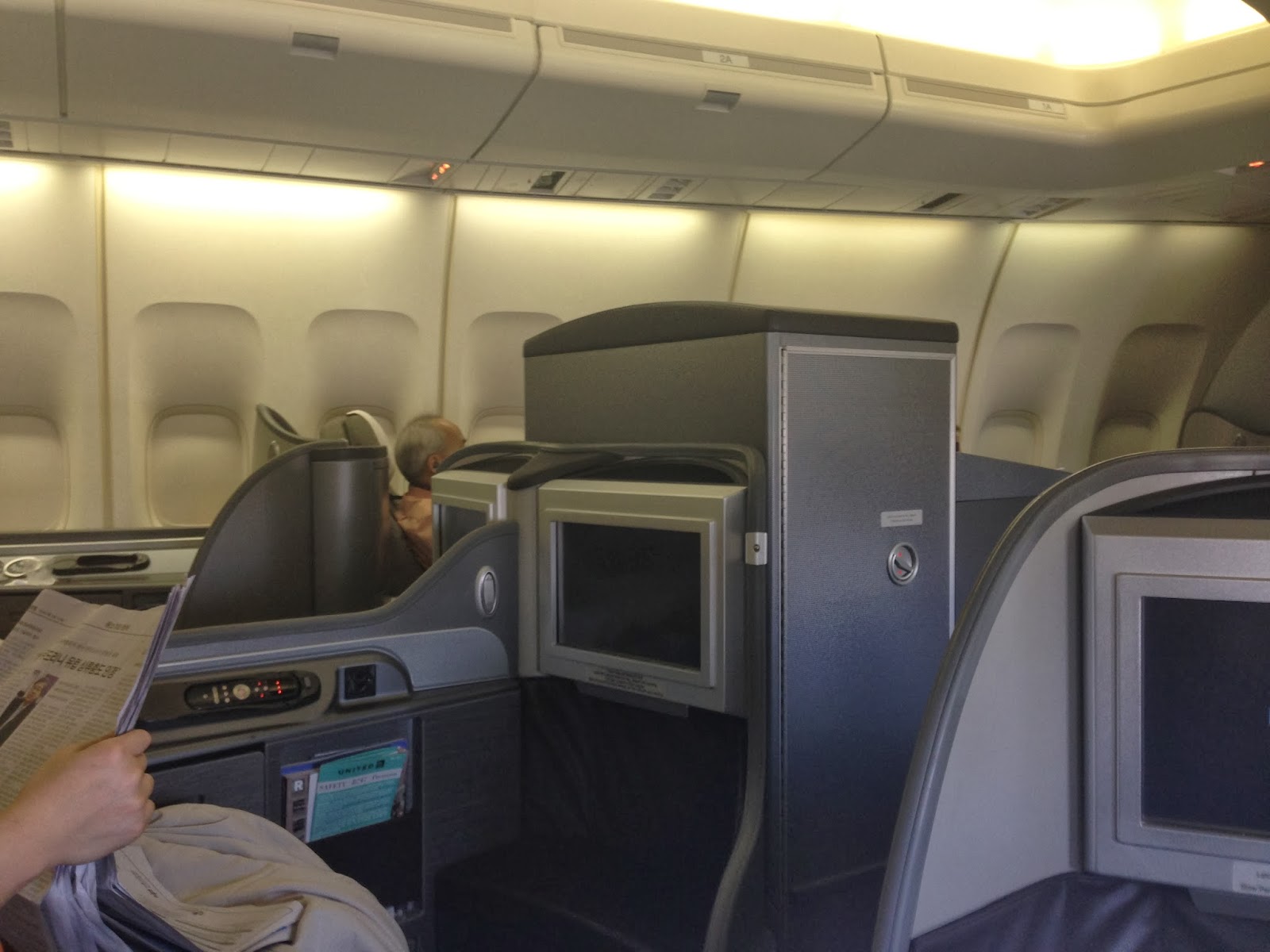 The cabin itself was very spacious and ended up being full by the time we departed - I've never had a seat this far forward to the nose of the plane.  Flight attendants were very attentive and always seemed available when needed.  I was impressed by the service - some reviews had it as fairly poor but I never saw a down time during the flight. And there was virtually no turbulence to speak of.

After a quick nap, we were landing in Seoul! 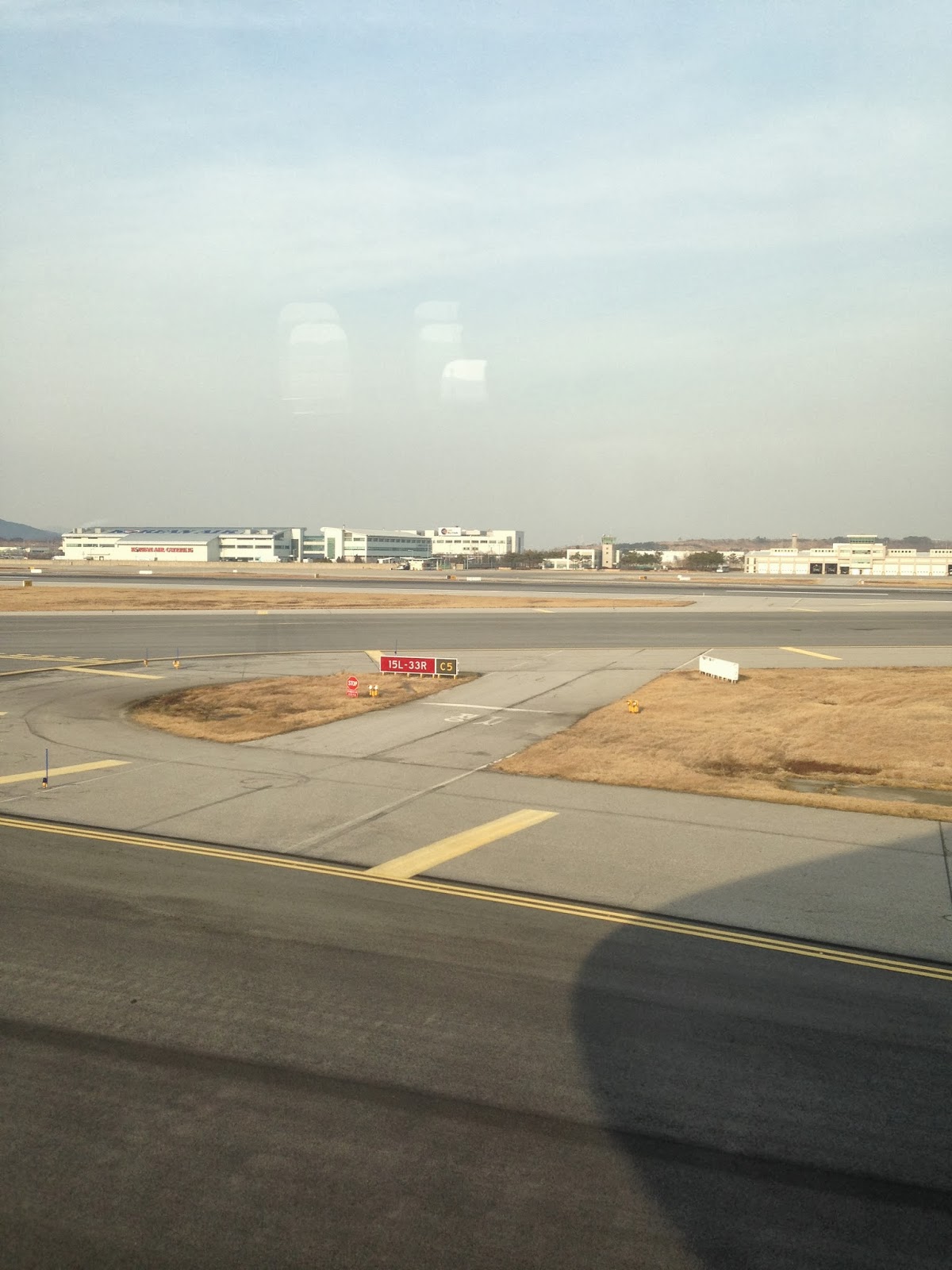 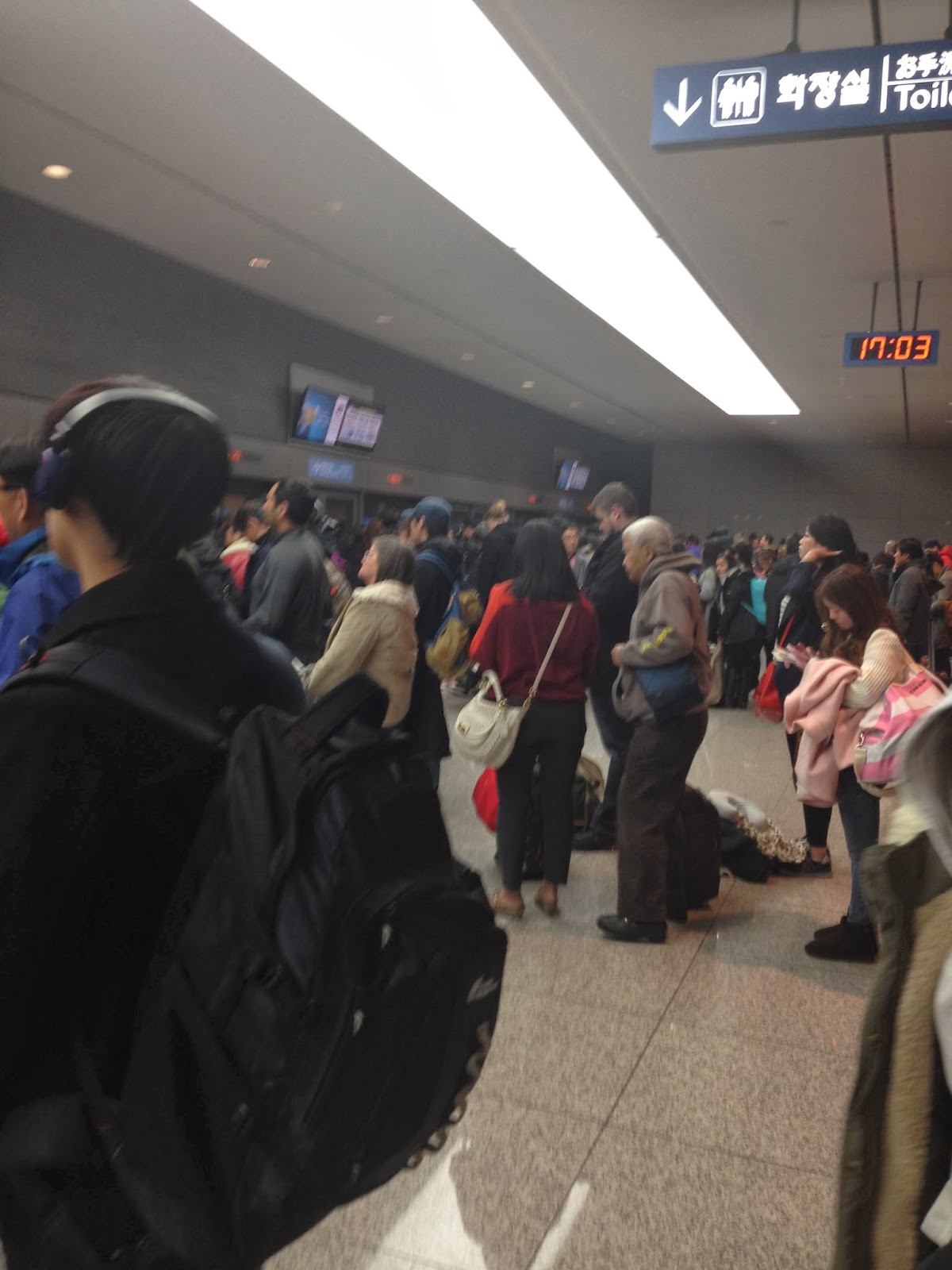 The line to get from terminal to terminal was a bit nuts and we were queued for a bit - I think they need to increase the speed of each segment.  After a quick ride and through customs, I met up with Jimmy outside of the gates and we were soon off on a bus to the base and the Dragon.  Other than a "minor" bout of jetlag, the flight over when pretty well.

We had a full day planned for Saturday!

Posted by Rich Bakken at 8:56 AM No comments:

A restaurant with a five-year wait??

Yes, it does exist (and it looks amazing!).  I love to try different restaurants as I travel, and the thought of having this many courses is astounding: 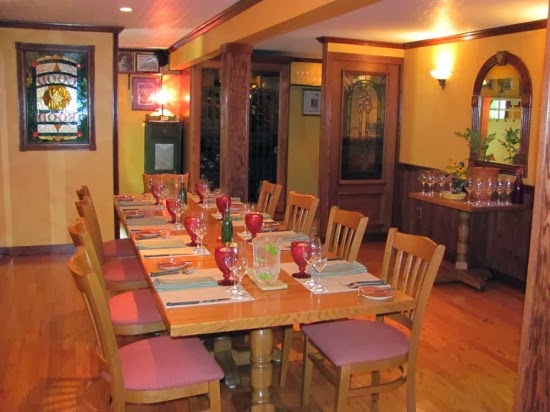 Posted by Rich Bakken at 8:54 AM No comments:

Trekking to the frigid on Friday!

I'm certainly blessed to live in San Diego where the weather seems to be perfect year round.  And while I enjoy the weather and being able to walk to work each day, I also aspire for winter and the opportunity to get home to snowmobile and be outdoors.  Thankfully, a good fare option presented itself and I'll be heading back to the northwoods this Friday through Sunday!

You can read about the current state of the trails via this link, but suffice it to say they're excellent!

It will be fun to get together with family again and enjoy the snow, fireplace, and good food.

And what will the weather forecast be, you ask?  One word:  Cold

Posted by Rich Bakken at 5:30 PM No comments:

Still no Internet, but I'm hopeful

I had planned on having my Seoul visit trip reports up by now, but I'm going on Day #8 of no home Internet.  Which means I haven't had a chance to work on them yet.

With any luck, the new router should be arriving soon and my productivity will be back to normal.

I almost couldn't believe my eyes:

And alas...it's only targeted and does NOT apply to Premier Qualifying Miles. 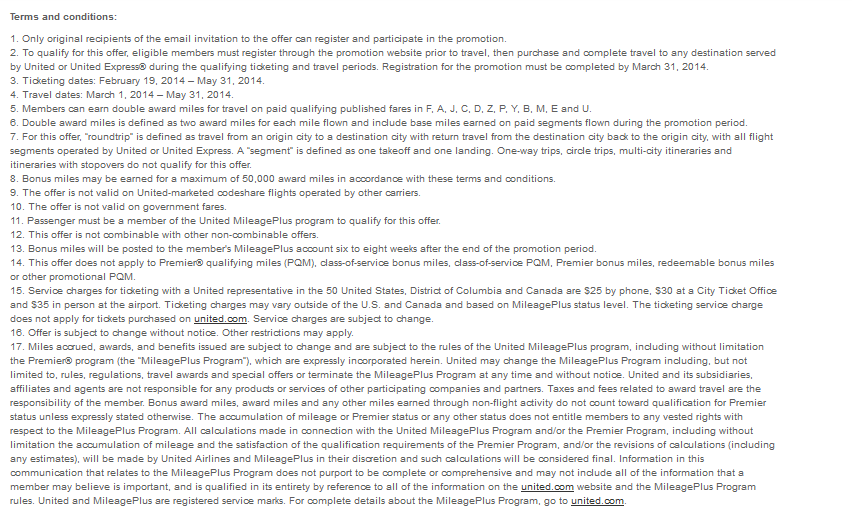 Posted by Rich Bakken at 4:21 PM No comments:

Hello from the Asiana Business Lounge at Incheon Airport!

I've successfully made it back to the airport prior to departure, and will head out in a few hours.  This trip has been nothing short of amazing and I'm very grateful to Jimmy for hosting me during this weekend.  We managed to get to just about all of the major things to see in Seoul in a long weekend - quite a feat.

My flight over was in Global First on United, and I'll be trying out BusinessFirst on the way home (upper deck!).  With any luck, I might even get in a few winks before landing in San Francisco.

Stay tuned for trip reports on each day - I'll be writing and posting those over the course of this week.

I'm quite fascinated when I read about what would normally be considered an absurd airline story...I mean, can things like this really happen?

Check out this article here.

First of all...does this really happen???

Posted by Rich Bakken at 9:14 AM No comments:

Back to it...but a short week

Had a very fun weekend with my parents, as they were visiting from sub-zero Wisconsin.  I think my dad's cold really got better being in the warm.

We managed to get on the road and out to Julian for a day trip (the Cherry-Apple pie was amazing!) and also down to Point Loma to do an overlook of San Diego.  We were able to see the submarines in port as well, which doesn't happen all that often with the fleet out.

Was sad to see them fly out this morning, but it's back to work.  Short week for me, though, as I prep for an ILA panel submission due by Wednesday and my departure for South Korea on Thursday to visit my friend Jimmy.

Posted by Rich Bakken at 8:39 AM No comments:

Cruise lines have been in the news again in recent weeks due to a variety of health concerns - namely that the norovirus seems to be a culprit when hitting the high seas.

If you're willing to take a chance on getting sick, there are deals to be had!

Holland America runs deals from San Diego - still not bad for a 4-day cruise up the coast ($249): 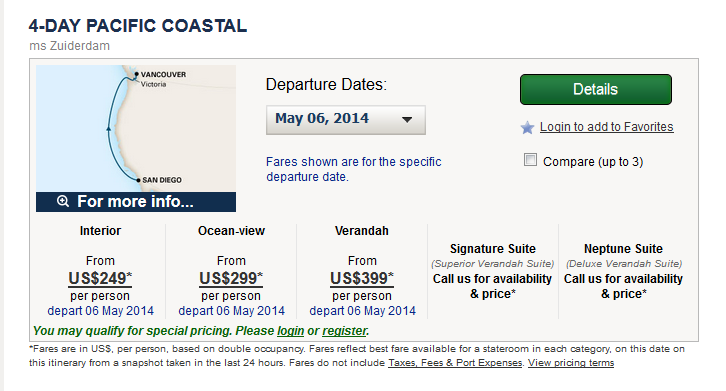 I, for one, have never had a huge interest in going on a cruise, but I wouldn't mind trying it at least once. And at prices like this, why not?

I've had a number of things on my list of places to see ever since I moved to California.  One of those is seeing the giant redwoods.  The other is visiting Catalina Island.

Recently, Groupon had a special deal on the ferry to get you over there - almost 50% off the normal rate.  Not bad:

This is a limited time offer, so get it now while you can!  I think I might...

The next 10-14 days are going to be a bit of a whirlwind, but I'm really looking forward to what's ahead!

First, my parents will be visiting over the coming weekend which is always fun.

Finally, next Thursday I depart for Seoul on my first trip that far east to visit one of my best friends who is stationed in SK.  It will be a long weekend and a lot of flying, and I'm looking forward to every minute of it.

I'm also eager to try United's Global First product for the first time on the way over, and Business First on the way home.  Trip reports will be forthcoming once I return and get my jetlag squared away.  Champagne!

Posted by Rich Bakken at 8:08 AM No comments:

Place of the Day: Transnistria

I love to read and find out about places that are off the beaten track and not generally known to most travelers.  Smaller countries usually fit this bill.  Probably the most well-known 'small' territories/countries are places that I still have yet to visit (I'd put Monaco, Guam and Hong Kong on that list).

But I was recently made aware of a new one and it's in Europe!  Or at least, close to Europe: 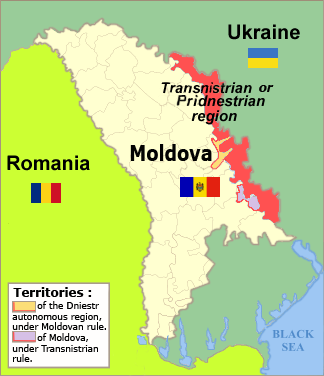 The brief history I read about this state is fascinating.  Transnistria is a small, sliver of land  just slightly larger than Rhode Island along the east bank of the Dniester River, between Ukraine and Moldova.  It was one of the countries that seceded from the newly formed republics when the Soviet Union collapsed - in this case, Moldova.  Not wanting to get into a tiff with Romania about the new country, Moldova succeeded in reaching an accommodation with the Transnistrians on de facto independence.

Tiraspol is the main city of this state, and I look forward to trying to visit sometime in the future.  Be sure to read up on this small country if you have time!

For another perspective, check out this story.

Posted by Rich Bakken at 8:34 AM No comments: