Place of the Day: Bora Bora

This is my 1001st post - bit of a celebration for me as I continue to write about travel, points, and generally fun adventures out in the world.  If you have the chance to venture out, please do - there are so many rich cultures to find that are more affordable than ever if you have the points.

I started writing about a "place of the day" several years ago, and today's post highlights an area that I still need to explore.

Part of French Polynesia, Bora Bora is a volcanic island that reminds me a lot of the Maldives. It's in a tropical climate in the South Pacific and located about 140 miles northwest of Papeete.  May through October is generally considered the 'high' season though the overall climate would be inviting to me just about any time of the year.  And honestly, who can pass up over-water bungalows? 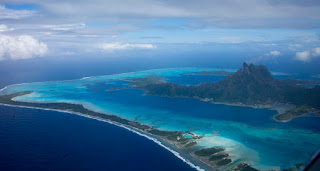 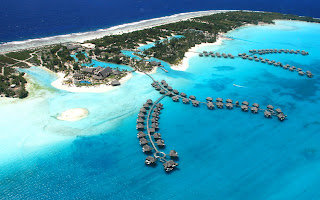 Getting to this region of the world has not been easy in the last years, though that is changing - United will being flying to Papeete starting in late October 2018 from San Francisco.  Connecting to Bora Bora from there is possible via Air Tahiti.  Mileage options are only 35k each way in economy (or 70k in business saver).
Posted by Rich Bakken at 11:48 AM No comments:

Email ThisBlogThis!Share to TwitterShare to FacebookShare to Pinterest
Labels: Place of the day, Points, Travel

The process and information to attempt a claim under EC261 is not easy; in fact, the agents on the ground working with us on the cancellation didn't even have copies of the guidelines onhand when I finally got to the counter.  I asked the agent for a copy of the rights and rules - she seemed surprised at first, and then noted that she would have to check on it.  After a five minute discussion and search, she found the pamphlet which outlines the terms of the delay/cancellation rights for EU related flights (of which Switzerland is a participant).  This particular flight applies since the cancellation occurred on Swiss soil before departing for the U.S.

This article provides a good summary of the rules.  Of note: If your flight has been cancelled or delayed you have the right to compensation under European law.  Under EU Regulation 261/2004, passengers are entitled to up to €600...

A few days after I returned home, I proceeded to contact United via email.  I detailed my flight information, PNR, dates, times, and the fact this was cancelled due to operations.  Part of my letter:


As such, I am seeking compensation under EC Regulation 261/2004 for this cancelled flight. My scheduled flight length was 6350 kilometers, therefore I am seeking €600 per delayed passenger in my party.  The total compensation sought is €600.

**In this case, it is critical that the flight was cancelled due to operations and no other reason (weather, etc).  There was no bad weather in Zurich, and the plane was on the ground ready to depart before being cancelled.  The stated reason at the time we were onboard was crew rest - this could have easily been avoided if the flight officers had arrived at the airport later based on the flight information.  Not a tenable reason to avoid the cancel and compensation. **

The initial reply from customer service was an attempt to explain the situation as a weather delay:
Due to the late arrival of the aircraft into Zurich for inclement weather conditions, the crew ran out of the FAA allowable crew duty hours and was required to complete a mandatory rest period.  As a replacement crew was not available on such a short notice, your flight was canceled.  Thank you for understanding the safety of our passengers and crew is our first priority.

Nope, not correct. My reply detailed the correct information:


Unfortunately the information you note below does not match what happened in this case.
I have attached a screenshot showing the reported issue to be operations - weather was never a stated reason for this delay.  In fact, United had to know about the issue enough in advance, given this notification shared with passengers, that having the crew report at the original time was their choice and forced the timeout you mention that could have easily been avoided.

The next reply from United was confirmed:
We appreciate your patience while we reviewed the circumstances surrounding the cancellation of your flight UA135 from Zurich to Newark on August 18, 2018. United Airlines has determined that, in this case, monetary compensation under European Union Regulation EC261/2004 is applicable.  Monetary compensation will be awarded only to customers who were holding a confirmed reservation, a fare paid ticket, and were checked in and available to board the aircraft in accordance with United’s Contract of Carriage.

As alternative options to your claim for compensation under European Union EC261/2004 regulation, we would like to offer you a choice of a $900 (USD) United Travel Certificate* (redeemable and transferable toward the purchase of any United or United Express operated flight) or 27,500 United MileagePlus® miles.

However, if you still wish to pursue cash compensation under EU regulation in the amount of €600, please provide a valid address where you would like for us to send it.  You will receive your compensation in the form of a USD check in your local currency.  Processing of your payment may take up to 6 weeks.

The cash compensation in this case is the smart way to go based on value toward the ticket already purchased - I did not hesitate to send my address and about 5 weeks after my reply, a check from United arrived in my mailbox!

I'm sharing this story to note the importance of documenting your cancellation/delay experience along with the persistence needed to affirm what you may be entitled to from the airlines when traveling.  I'm not sure why United tried to make it a weather issue, but it was obviously not.

Thinking back, I wonder how many other passengers submitted claims ... and how many were successful.

In all of the trips I've taken overseas and around the world, I have never had an occasion to experience a flight cancellation - even on our round the world trip where we had multiple stops in a variety of timezones, every flight was on time with no problems.

Until this trip finale.

Curiously I noticed on the way to ZRH airport that Flightview was noting a possible delay of nearly 3.5 hours.  There was no bad weather in Zurich, and frankly I didn't see any major delays at other airports either.  When I got to the gate, our flight crew was there and waiting for our plane to arrive; by that time, the delay had settled at a few hours due to 'operations'.  I spoke with the captain briefly while we stood there waiting and he was kind to share that Channel 9 would be available for us to listen to for the flight.  I always enjoy listening in on air traffic control when I can.

The inbound plane finally arrived, and after the usual time to disembark passengers and prepare the aircraft we started to board.  The E+ cabin seemed a bit lighter than expected; I was due to have the seat next to me open (a bonus!).  At this point I checked my flight app to find the following shown:

Bangor!?  This does not bode well.  A diversion airport typically means we have a problem at destination or something up with the crew.

The captain by this time was making periodic announcements that due to operations we were likely going to depart but be delayed.  A second announcement detailed that one of the pilots was going to time out and therefore we needed to stop at BGR for a new crew.  That wasn't going to bother me provided we actually took off.

But after another 45 minutes or so, the delay became a full cancellation. We waited nearly 20 minutes more for a crew to move the jetbridge.  And then a small round of chaos ensued.

I know that airlines/airports generally prepare for these types of things, but in this case United and ZRH Airport could have done better.  There were no agents to detail where we should go or what to do.  Many had checked luggage - how do we retrieve?  We were told vouchers would be available but not where to get them.  And to get to Baggage claim everyone had to revisit passport control.  Yikes.

When I finally got to baggage claim I quickly found the United area where a line was starting to form.  An agent was trying to tell passengers in line that no rebookings would be possible at this location - everyone was to use the App or call.  For international itineraries, this was an epic fail in my book.  I finally got my turn with an agent who gave me a hotel and shuttle voucher (I would have to find out flight details on my own).  Since this cancellation occurred in the EU and for no reason other than ops, I also asked the UA agent for detail on my rights to claim compensation under EU Regulation 261/2004.  That certainly took her by surprise...she asked to pause, walked away, and came back with a pamphlet that detailed the request process and rights to file a claim. Her recommendation was that it was more of a hassle than it was worth to file though it was my right to try.

The hotel I was given was not bad - the Kameha Grand - I used my train pass to get there and after a quick bite to eat was in bed to be up for a morning departure back to Newark.  There were no issues on the return; in fact many of the passengers kept their same seats.  We flew on the same plane with the same crew back - quite the day but I wasn't going to give up on putting in a claim for compensation...

Posted by Rich Bakken at 5:05 PM No comments:

One of the best redemptions I've ever made was the pre-devaluation flights that took us from Auckland to the Maldives and back to JFK.  A380 business class at that point for two people was only 225,000 miles!

If you have American Airlines miles, this is still a decent option for redemption if you're looking to travel to that region.

To find award flights, visit the Etihad website and search for miles options with "guestseat" award categories.  Once you have those flights identified, you will still need to contact the AA Australia/New Zealand call center to book (since US agents still can't see most redemption options).   Make sure to confirm the amount of miles you need by visiting AA's chart for OneWorld and partner airlines.  Note the Maldives is considered "Indian Subcontinent" and the Seychelles is "Africa".

A quick review shows from the US to the Maldives in business class is 70,000 miles one way per person.

Posted by Rich Bakken at 4:33 PM No comments:

I can't begin to say thank you enough to Shannon and Aaron - the trip overall was fun with so many memorable places visited.  We had no issues to speak of with our rental car experience and driving was fun (much discussion and fun music!).

When you plan a trip in advance like we did you always hope the weather and logistics aren't a factor; we successfully scoped out AirBnb's that complimented our desire of seeing the countryside and meeting locals along the way, while drafting a list of our preferred sights and meeting just about every one.

Till our next adventure! 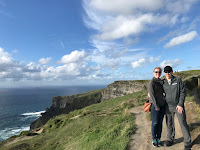