I must say…it’s nice to have clothes. Not that I hated my clothes that I had been wearing, but a change was needed. (chuckle) Crazy bags anyway. My story for that was a little amusing. The front desk called at 3am to let me know they had arrived (and naturally I jolted awake at the first ring). I told the guy to just keep them there for me, and he agreed and hung up. Three minutes later I was jolted again when the phone rang. Same guy, asking me about the bags. I told him to please keep them, and he said something about signing a paper so I asked him to please just sign it, and he agreed and hung up again. Five minutes later, the doorbell rang. I couldn’t tell if it was the doorbell really, it was just a noise. So I decided I just better get up and go down to make sure he’s ok. I get dressed, open the door, and there are two guys just standing there (with my bags) waiting. I apologized for not coming sooner, signed the paper, and grabbed the bags. Then I figured I should tip, so I got out some paper money and handed it over, and promptly went back to bed.

When I woke up, I couldn’t find my money. Did I give it all to them? Minor freak-out moment, until I located the bills in a pocket. Whew!

Our departure this morning was 9am, and took us to the Islamic Cultural Center. It actually was a very interesting experience. The start of our tour included a sit down in their hall where we were served small cakes and a sample of Arabian coffee (not bad actually). We got a bit of history lesson for the first hour or so about the background of the Islamic faith, and had a very good question and answer period. There are so many tenants to the faith, that I came away asking myself how many people in America really know about how the faith works, and how related to Christianity and Judaism it is. The second part of our tour took us up to the actual Mosque, and we spent time in the room and were able to observe how prayers are performed and what is said. It was a nice way to learn what they were saying, and how it tied into the prayer process. Pictures were taken, and one is below. At the end they presented us with individual bags of gifts explaining what we had seen today, which was very unexpected and also very kind (although one of the items we received we’re not really sure about yet…thermometer?) 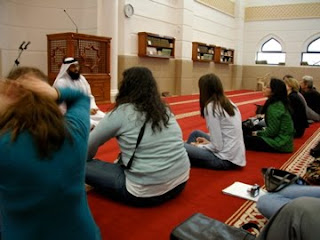 For lunch we walked across the street to the Souk (or marketplace) to get some lunch at Café Tasse (where our food took forever to arrive, but we made it back on time). We were able to preview some of the shops we would be seeing later during some free time, and a group of us sat down for some Italian bread and pizza. Very authentic, and very yum.

The next stop post-lunch was the Museum of Islamic Art. The building was designed by architect I. M. Pei, and was one of the last buildings he ever designed. A magnificent structure, we were very awed by the design inside as well as the dome on the top. We split into two groups for the tour, and came away with many pictures of artifacts from as early as the 9th century (including ceramics, jewelry, carpets, and many tile pieces). I was mostly impressed by the many different colors used on the ceramic pieces, and I’m still not exactly sure how long it takes to construct the rugs that we saw…just amazing.

After a quick group meeting post-our tour, we were back on the street to the Souk for some food and bargaining. Gotta be firm with the shopkeepers, we discovered, or they’ll try to get every last Riyal out of you while you stand there. I think I came away pretty happy with what I was able to get. No doubt we will head back to do more another day. For dinner, a small group of us decided to stop and try out a Moroccan street restaurant called Tajine (after all, how many times do you get to eat at an authentic one of those in your life, right?). Grace, Jacqueline, Christine, and I shared a sampling of lamb and chicken kabobs as well as some saffron rice and coffees (and a Coke for me) to round out the meal. We even had a visitor as we ate (there was a cat hanging around our table which wouldn’t leave…and really wouldn’t go after Jacqueline accidentally dropped a piece of chicken on the ground). 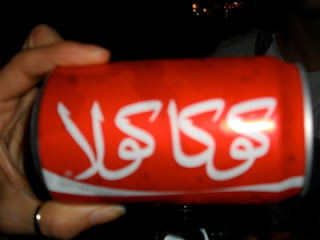 My only oddball moment from that experience was being in the bathroom right before we left, and having the cleaning guy come in and try to mop/clean the whole bathroom right while I was in there…just a tad bit awkward to say the least. I mean, can’t you wait until we’re done in there before you come and start throwing the mop around???

As we were walking out, saw a man walking down the way with his pet monkey. Yep.

Almost on the right sleep schedule…sleep tonight should get me fully on track. With no phone calls needing to wake me.

PS – forgot to mention yesterday that I was able to procure some multi-vitamin juice while at the store…sure wish I could buy that stuff in the US. There was also an entire case of cheeses in all shapes and sizes…I took pictures.

PPS - our group was highlighted today in the Gulf Times - check it out!
Posted by Rich Bakken at 11:08 AM