In the scope of my searching for flight mileage redemption options, I'm always on the lookout for new Alliance-based options for using miles.  Sometimes using a partner airline can be as good or even better than the airline where miles are banked.  And since most of my recent travel has been on American, the news I just saw today via DohaNews is very exciting:

Qatar Airways will be launching service from Doha to Sydney, Australia

Australia and New Zealand are on my aspirational travel list and I'm hoping that an opportunity presents to get there in the coming months/year.  Since the flights are long and often expensive using miles would be a great way to visit.  With Qatar Airways in the Oneworld Alliance with American, having an additional redemption option will be good to explore down the road.

The flights are scheduled to begin March 1st, 2016.

Posted by Rich Bakken at 6:40 AM No comments:

Waterfalls to Visit in the US

There's something about waterfalls that really draw me in - I'm not sure what it is exactly but the creation and reflection opportunities they provide are very special.

Wanted to share this particular article on top waterfalls within the US:

Waterfalls in the US

Can't wait to check some of them out!

Posted by Rich Bakken at 5:36 AM No comments:

I'm always on the lookout for good deals in and around Europe (especially in summer when it's very expensive typically).  Kayak has been my mainstay for many years and I supplement that search with the ITA Matrix and other main carrier sites when I search.

But this particular new site has some possibilities if you don't mind connecting to a low-cost carrier in between.

The article quotes the site info in this way: searches routes to and from the world’s 500 largest airports—in Europe and beyond—to "combine two roundtrip tickets from non-partner airlines to find the cheapest fares"

I'm all for that!

I tried out a few standard searches between the US and Europe and the site works pretty well (a few glitches here or there).  I'll definitely add it to my portfolio of searching, if nothing more than to reference what other options exist.  If you're keen on qualifying for status or other programs, this site may not be for you!

Hat tip to Conde Nast for this information...
Posted by Rich Bakken at 1:41 PM No comments:

Crazy start to the trip

Greetings from 40,000 feet on my way to...Manchester!  I knew I'd be up here on my way east, I just wasn't expecting it to be on this particular plane. My original itinerary called for a quick change in Dublin before proceeding on to Abu Dhabi. But to my surprise as we got closer to boarding, the gate agents announced that the flight was oversold. Oversold? An international flight?? How does that happen? In any case, if anyone was flexible the offer was $700 vouchers and a free hotel night till tomorrow. In a flash I was on Flight Track ... could this work? I just need to get to Abu Dhabi before midnight. No other AA flights available from O'Hare, couldn't get back to PHL and make the connect, but one BA flight in 2 hours with a connect to AUH at Heathrow. That one seemed the most likely to work, and was coded as an AA flight. Off I go to the counter where the agents were ecstatic to see a volunteer. It seemed as though they had a major situation brewing. I mentioned I could do a change to help but only if they could work with me on getting to Abu Dhabi in time and all the flights were coded as American Codeshares. (Etihad, remember, is not a OneWorld member but an American partner. To get elite qualifying miles it must be coded as an AA flight. After all this I couldn't go that far and not get the qualifying mileage.). When the agent saw my ticket and that I had no bags, the challenge was accepted - I did explain what I was doing and they seemed pretty amused by the whole thing. After several phone calls and a supervisor to rework my ticket, they found a seat showing on an AA flight to Manchester UK just finishing boarding that could connect to an Etihad flight coded as American. The gate agents for that flight weren't being cooperative with the seat but my gate crew told me that I was being added as an 'upgraded' passenger since I was platinum. Ok.  And after a quick discussion, the supervisor also approved the $700 voucher.  Awesome. I got my new tickets and voucher, and raced to the new gate.  When I arrive the agents there were very confused and tell me I have no seat (laugh). Of course. THEY have to assign the seat, not the Dublin agents. And due to a full plane and the coded upgrade note...I received a business class seat just as the door was beginning to close. Couldn't have asked for a better start to this trip. Onward!  Wonder how this Etihad connection will be...and whether all of this mileage will post correctly. ;)
Posted by Rich Bakken at 2:44 PM No comments:

A weekend to jet

Happy holiday weekend, all - while you are having fun, you'll never guess where I'll be...that's right...on airplanes!

In my effort to get to EP for the year, I'm really close - which means I need to follow through on reaching the final mileage required.  And since this weekend offered the extra day to go I jumped at the chance to head out.  American will be my preferred airline along with stints on British Airways and Etihad. 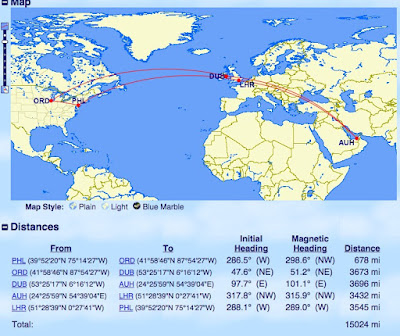 I'll be back by Monday afternoon to PHL...not bad.  Will be posting updates as I can, although I won't really have any regular type of internet.  A full recap writeup will follow!

Posted by Rich Bakken at 9:51 AM No comments: