I decided to try a new method for picking a new place to highlight today...random pick without looking.  And since it's Friday, the fact that this place is one I wouldn't have thought of is a great way to celebrate the weekend being here!  Too bad I'll be stuck in class most of the weekend, but still...here we go: 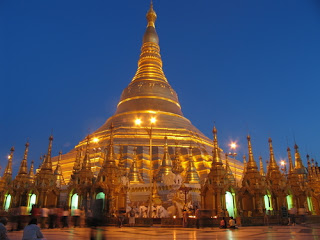 Completely sheathed in gold and sits on a 14 acre complex.  Tradition says you must walk clockwise as you pass columns, spires, and other artifacts on your way by.  The top of the spire holds a golden orb containing 4350 diamonds with a 76 carat on the tip.

Posted by Rich Bakken at 9:33 AM No comments:

Down by the river...

Today's highlighted place to travel needed the above intro from Matt Foley...well, maybe it didn't.  In any case, the place to go is:

An expedition up the Amazon! 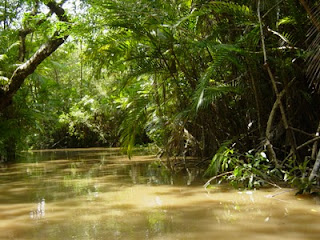 Once known as the "River Sea", it has 1000 tributaries and has a flow 10 times greater than the Mississippi.  You're wise to use an expedition service to show you islands, riverside villages, and treks into the rainforest.

I'm not sure what it is, but just the thought of an excursion down the river, not knowing what might be around the next corner (or hanging above you from an overhanging branch) sure does shout 'adventure'.  The rainforest is also intriguing - so many different kinds of animals and natural habitats.
Posted by Rich Bakken at 9:25 PM No comments:

...(sorry this is one day late...broke my own rule already)...is the Gold Museum in Bogota, Colombia! 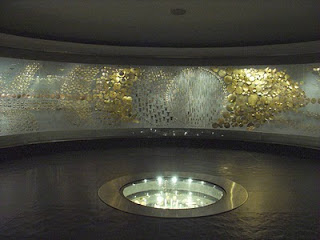 Less than 15% of the Museo de Oro's 30,000 artifacts are on display - the only collection of its kind in the world.
Posted by Rich Bakken at 8:22 AM No comments:

If you guessed the last post correctly, then you already know that my weekend excursion took me to the very sunny and very humid islands of Bermuda (thank you AYCJ). It was a very short visit, but I know I'll be going back. 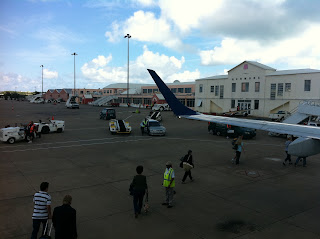 Upon arriving, I wasn't three steps of the plane when a ground lady yelled at me to not take any pictures (we had deboarded on the Tarmac) since my iPhone was at the ready to snap. Ok...no pictures on the Tarmac. Immigration was fast, although they asked me at least four times if i had brought cigarettes or alcohol in...I wonder if they have a problem with that.

My first stop was going to be the Town of St. George, the original settlement on the island. And I was determined to save money and take the bus. I asked a lady outside to direct me and found the waiting area, but was greeted by a random rain shower as I walked over. 99% sunny, and one dark cloud of downpour. Soon the bus arrived and I got on, and had my five dollars ready. Except apparently the buses only take coin, tokens, AND exact change. That would have been good to know. The driver was slightly irritated with me, but finally took my money and let me on. Whew. 20 minutes later I was in St George.

My walk around the town was sunny and warm. And even though the unfinished church had a no trespassing sign, I couldn't help myself.

After a walk through the town hall, I decided on a taxi to take me to my place of stay. My driver was a govt employee and he gave me a great info session on the way. Some highlights:

- the island is only 20 miles long, almost 2 miles wide
- it used to have a railroad that no longer functions
- the airport used to be a US military base, closed in the 90's
- there is no income tax

- the roads are narrow because they were only intended for horse and carriage - max speed limit 20 mph
- there is a strict limit on cars; mopeds are widely used
- bermudian money equals US dollars in value and you can pay with either
- The famous people and their houses are near Tucker's Town
- Harrington Sound is the mouth of the original volcano

Soon I was at my place, the Fourways Inn and Cottages! I'll let the pictures do the explaining of my room...amazing.  After the girl showed me to the room, she asked when I wanted my breakfast.  With a confused look on my face I blurted out "8:30", and she continued on by saying that breakfast would be delivered to my room in the morning.  And I must say that it was very prompt, tea and all.

I made a quick run to a local grocery store for some drinks, and decided it was time to head to the beach. I chose Elbow Beach since it was closer, and off i was walking. The side streets are fairly quiet and I enjoyed being outside...except until I ran out of walking space by the road. And I wasn't about to walk on the road with the cars whizzing by. So i flagged down a taxi and 5 minutes later was at the beach. The sand and water were warm...just nice to walk and think.

On the advice of my first taxi driver, I located the Sea Breeze Cafe and decided on tapas for dinner. Very yum...will definitely go back to this place again.

All in all a great day...wish I had more time, but I'll be back.

- Posted using BlogPress from my iPad
Posted by Rich Bakken at 2:17 AM No comments:

- Posted using BlogPress from my iPad
Posted by Rich Bakken at 2:15 AM No comments:

Yep...I'm happy its Friday.  Once I'm finally done with my workday, I'll be hitting the road.  Destination you ask?  I'll be posting about it when I'm back on Sunday evening...

...but for now, how about another destination to check out?  And the winner today is: 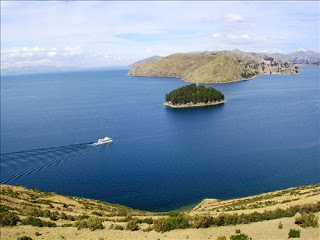 Located near Puno, Peru, this is the highest navigable lake in the world (12,500 feet above sea level) and contains several islands, some man-made. Excursion only though...no cars or roads!
Posted by Rich Bakken at 11:19 AM No comments:

I decided today to add a new daily (at least I'm going to try to do daily) post on some of the top places to see and visit in the world, based on a popular travel series called '1000 places to see before you die'.  Since my travel bug is always lurking within, this might be a cool way to share some neat and interesting places that you might not have known about before.

The Southshore Beaches of Bermuda! 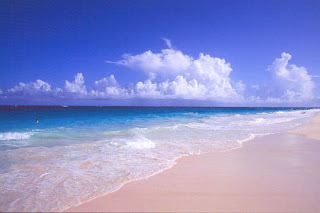 In the late afternoon sun, the sand on the beaches of Bermuda turns a rosy-pink color because of the crushed choral that washes ashore from the surrounding reefs.  I had no idea that Bermuda is made up of over 143 islands...the 7 main ones seem to usually be the focus.  Elbow Beach and Horseshoe Bay are the most well-known, with Warwick Long Bay not far behind.
Posted by Rich Bakken at 10:24 AM No comments:

The news finally broke today about United's plan for integrating MileagePlus and OnePass, and you can find the details here:

The move to four tiers is an interesting change, as is the requirement to fly on United four times in order to reach any status (meant to make flyers focused on United rather than other Star Alliance partners?). The premiere bonus mileage is also changing per flight - bet that won't go over well (since for me as a Prem Exec (Gold) it would mean 50% instead of the 100% I'm getting now...Boo).
Posted by Rich Bakken at 9:49 AM No comments:

I wonder if this is a real scientific study...

I actually found it interesting that the coin is just about as old as I am - pretty neat.

Not sure what it is about $1 coins, but I like them. As I've traveled around Europe, I've enjoyed being able to use $1 and $2 coins...seems like they're just easier to pay for things. Wish that the US would figure that out.
Posted by Rich Bakken at 8:51 PM No comments:

my day so far

Anyone wanna come work for me so I can take two weeks off and go on a vacation?

Here's how my day has gone so far:

1. Shaver broke - finally figured out how to turn it off
2. Cleaned out back build area (and thankfully had help to do it)
3. One staff member out today.
4. A student working at the Aztec Market asked me whether the $1 Susan B Anthony coin I handed her for my drink was real money. Had to explain that it was.
5. Realized that I don't have my textbook for class tonight.

I'm a bit in shock that the end of the first week of school is already here - was pretty hectic overall.

This picture shows the chaos of what happens when a 500-seat classroom gets done and another is trying to start: 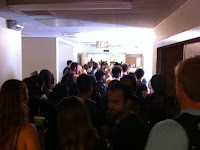 Tonight will be busy as the GSC will meet for the first time for our retreat down by the bay.