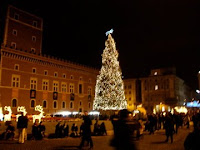 Happy New Year to all!

I successfully made it to Rome, and New Year's ended up being quite different than I had thought it would (let alone the fact it was going to be New Year's in Rome).

Landing at Fiumicino, I was confident I remembered the airport and where exactly I needed to go. Only problem: I've never had to try to get a shuttle before. The last time I was here I took the train and that was so easy - not so easy to find a hotel shuttle. Not only that, but the cab drivers have moved into the terminal to look for business, so I was barely out of baggage claim and I had three guys asking me if I needed a cab. Seriously. The curb is where you live, not in the terminal.

I waited for my bags for about 45 minutes, and, of course, mine were the last to come out of the chute. The last 15 minutes of waiting for me were the usual "oh great, of course it would be my bags that don't make it after I see everyone else getting theirs", but happily they arrived with no problem. Then I proceeded out to the curb...where nothing is labeled.

You'd think that airports would make it a point to put where shuttles or buses pick up, but it would seem as though FCO focused mainly on the taxies. I wandered to the left outside first, watching cars and buses go by, then walked back to the right and eventually gave in to asking information. I hardly ever do that, but I didn't want to keep walking aimlessly. The nice girl told me to walk across the traffic, two lanes in fact. There definitely is not a sign hanging to do that. I followed a Chinese family across the two roads, and sure enough - there is my hotel pick up area. The shuttles come every 40 minutes, so I waited. And eventually one came - I was the only passenger.

This Courtyard Marriott is very nice, and I have a good room. I was tired when I got in, and proceeded to take a nap before running downstairs and getting some dinner. The hotel restaurant has a great menu, and I tried some linguine with basil and parmesan which was excellent. Then...I went back to up my room to decide what to do.

The hotel runs a shuttle to central Rome, and the last one was scheduled to depart at 10:40p - perfect. That would get me there just around the right time and before midnight. So I went downstairs and reserved my spot. About 30 minutes later (during my nap) the phone rings and its the front desk. All the final shuttles of the day are canceled, due to New Year's, and the last one left 20 minutes ago. Arrr. Why didn't she call me sooner? There was still the option to shuttle to the airport and take the train, so I got myself together, and went down to try and do that option. Except, that the girl wasn't sure if that shuttle was running either since no one was there. One of the porters who was leaving to go off-duty was standing there though, and he volunteered to drop me off at the airport to catch the next train to downtown. What luck!

So off we went - to what I thought was the airport. In about 2 minutes we both realized that I only spoke English, and he only spoke Italian and French. Whoops. After much hand gesturing, nodding, me saying 'si', and what I thought was the road to the airport, I found that we were on the highway going towards the city. Guess I must have gestured the wrong thing, but at least I didn't have to take the train. The porter drove me near Palazzo Venezia and then let me off, since the whole city center was shut down to traffic.

I walked towards the square, whilst at the same time trying to look at my map about where exactly I was. This was not so easy in the dark, and with a ton of people walking around. Since there was a long stream of people heading in a certain direction, I gave up on the map and just followed the crowd. Ended up being easier than trying to figure out where I was. Through back and side streets we went, with more and more people joining until we were in the Foro di Nerva.

I can't even begin to describe how many people there were. It was unlike anything I had ever seen or experienced, and as everyone tried to wind there way through the crowd, it got more and more difficult to find a space. There was a concert on the Via Imperiali, so that road was closed and everyone had to just find a spot to stand. Eventually I got a spot near the railings of the Forum, but some groups were lighting off M-80s and other fireworks so you had to be careful not to get too close.

As midnight neared, the crowd kept getting bigger and soon I was sandwiched in between two ladies and this one weird guy, and everyone around had their bottle of champagne ready to go. The porter had given me an umbrella, which I thought was for rain, but as the clock ticked I saw umbrellas open and I figured out why - spraying champagne. Too bad I was so scrunched I couldn't move to open mine.

3, 2, 1 - Buon Anno! The champagne sprayed, the crowd cheered, fireworks went off...and I ducked as flying cork bottles and champagne were flying everywhere. :) It was amazing to be in the heart of Rome for New Year's, and it is an experience I won't soon forget.

Nor will I forget trying to get back to the hotel. Of course, with a million people in the Forum, getting a cab back to Fiumicino would not be easy, and it wasn't. There was no shuttle running, so a cab was my only option (along with another half million or so Italians). I waited at a taxi stand for about an hour and a half, and finally one came and I hopped in ahead of the other 40 people waiting. Whew.

I made it back - 2:30am - and then off to sleep. Since most major attractions are closed on January 1st, the rest of the day for me was relaxing and enjoying not having to do anything. Tomorrow I shall get up early and head to the Vatican, as well as the Forum.

Here's the video - not long...was a trick to shoot it on my camera: