Today was officially my last day at Education City. Throughout this week I've had a really good opportunity to work with faculty and students on interviews and observations, and overall my time was very well spent. Today though was probably the most disappointing day I've had here. Three scheduled and confirmed interviewees did not show, which puts me under my target number. I'm thankful for the interviews I've had, and overall the data will be very good that I've received. But I'm frustrated by those that did not show, and also frustrated by one school that I ended up having difficulty working at.

I'll have a chance to further reflect on this later, but suffice it so say, I'm just down at this point in the day.

One area that I was able to visit on my last day was the new Student Center - much farther along then the construction site we were at last trip, but still not quite 100% finished. It's due to be open soon, but I couldn't help but take a few updated photos - pretty awesome: 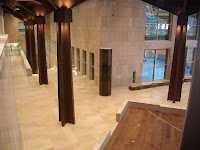 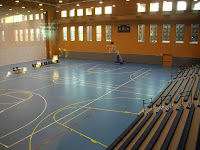 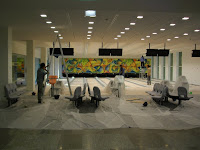