and around we go

Probably one of the most frustrating things so far with my research has been the occasional time where a student forgets to come to an interview. I've had one student scheduled at least twice that has failed to show up for whatever reason, and while sometimes this might seem like a harmless oversight, after two times it starts to become a general annoyance. It also means my stress level goes up because I'm trying to make sure that I meet my participation goal for this study. I've had an overall successful day and have conducted several interviews, so I'm very glad and thankful for the students that I have spoken to so far. But, tomorrow is technically my last day since it is the end of the school week, so I really only have one more day to get my final participants. 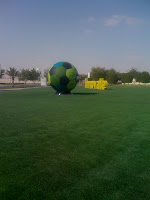 While walking through campus today I took this quick picture - there's just something cool about having a really huge soccer ball sitting in the midst of the green.
Posted by Rich Bakken at 4:42 AM