It's not raining in London... 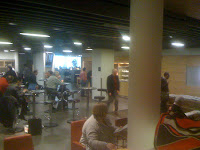 And it's not too cold either. I'm writing this post from the Star Alliance Lounge at Heathrow as i sit and wait for my next flight...which just posted up that it is delayed due to a mechanical issue. Lucky me. We'll get another update in 30 minutes. Everything was on time when I landed, so I guess I'll see what happens.

My Qatar Airways flight here was fine, but unimpressive. For being a 'five star' airline, I wasn't too impressed. My headset was broken and I never got a new one even after I asked. They never did a beverage service the entire 7.5 hour flight - I had to get up and go ask for a drink. And the food was mediocre...a mushroom crepe-ish looking thing and a lamb pita thing for a snack. The guy sitting next to me was also interesting. Extremely over-cologned and asked if I would switch seats with him (he had the middle and i had the aisle). Ha. Nice try. Plus, he was almost too big for the seat and was crowding over into my space. I hate that.

But upon landing, my nice gold Star Alliance card got me access to the lounge, and so I'm enjoying free food and drink, free Internet, and shower service if i want. I'm thankful for this, and even more so on a delay.

Will update again in a bit. I think I'll try the veggie samosa next...


- Posted using BlogPress from my iPad
Posted by Rich Bakken at 6:49 AM