A kingdom within a kingdom

My choice of destination for today was another random choice, but intriguing none the less...

The Kingdom of Mustang - Nepal 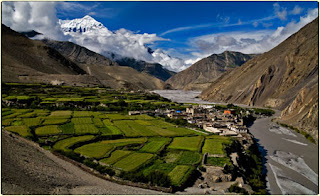 And no, it's not about a horse.  This is referred to as a 'kingdom within a kingdom' as it remains relatively autonomous from the Tibetan government, ruled by a ancient Tibetan royal family. Filled with ancient walled fortress-villages and monasteries, its trade routes date back 1000 years.  Only way to get there though is through a trekking company.
Posted by Rich Bakken at 11:10 AM