The end of Saturday

Finally back after a very long day. G&G had a very wonderful time as we next visited Stonehenge and Bath. The weather cooperated sort of as the rain came on and off and tended to just be a bit of an irritation.

What we didn't expect was traffic...it took almost 1.5 hrs to get to Stonehenge and lunch. After getting stopped and at a standstill in the road, as most of the bus slept, Grandma's announcement to the tour leader was, "well, this must be the slow boat to China.". Love it. She soon fell asleep though, and fun pictures will follow. :-) 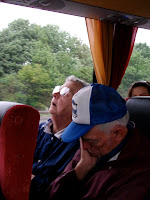 Stonehenge was very rainy, and had lots of people, but was nice to walk around and see. It was at the end of this walk and back to the bus where i talked with another older couple from our bus who went on about how wonderful it was to visit here. When i asked why, the guy (i believe his name was Mikhail) told me he never was able to travel with his family in his job for thirty years. I asked him what he did, and he said he was in music and i said I was too and that I was a vocalist. That's when he told me he was a Principal violinist for the Moscow Philharmonic for years and now lives in CA. (!) Had a very nice chat with him and his wife. We also had a very fun time getting to know another person from the states, Beth, who just moved to London temporarily for her work. And, another couple from San Diego was also glad to talk for a long time about the Padres and Chargers. Too much fun. 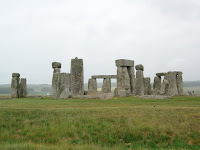 Bath was equally as nice, but I was disappointed that we only had an hour there due to us being late. The ruins were very great to see, and unfortunately there were a ton of people to wade through. Then we hit the trail for our 1.5 hr ride back to London and some quick dinner. The day is done. 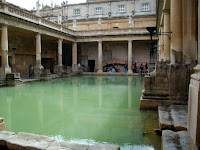 The Bath is still steaming!
Not sure on tomorrow yet. Maybe the tower of London will call our names.

- Posted using BlogPress from my iPad
Posted by Rich Bakken at 2:22 PM