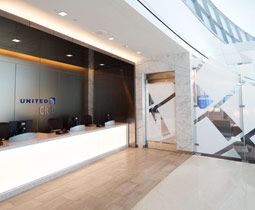 United was in the process of moving is primary gates from Terminal 1 to the newer and improved Terminal 2 at San Diego International Airport (SAN), and as a result, the United Club has also gone through a makeover.  If you've ever visited the Terminal 1 club, it was much smaller and limited in terms of food and amenities (widely discussed on Flyertalk).

More details from the announcement:

The 5,842-square-foot United Club in San Diego is on the terminal’s mezzanine level, directly above the airport’s new Sunset Cove. The location of the lounge affords spectacular panoramic views of the Point Loma seaside community as well as the airfield. Its open layout features a centrally located buffet and bar and 119 seats, including balcony lounge seating in the atrium. The walls are dotted with vintage airline photos. The new furnishings are conducive to relaxing or getting work done with greater ease and comfort. As with all United Club lounges, members may enjoy complimentary snacks, beverages and Wi-Fi.

The newer Club looks greatly improved!  Check it out here!

(I'm going to miss Terminal 1 though...always seemed a lot easier to get through security and not endure the bustle that is Terminal 2.)