Place of the Day: Medina

During our first trip to Qatar, we had the opportunity to visit the Fanar where we had a chance to explore and learn more about the Muslim faith.  As part of that experience, besides visiting the mosque and prayer areas, we heard about the holy sites that are revered in that religion and are part of a collection of historical locations.  One of those sites I'd like to highlight is in Saudi Arabia: 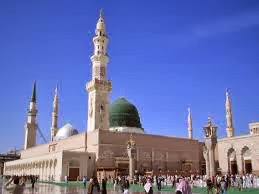 The al-Nabawi Mosque is considered to be the second holiest site in Islam after the Holy Mosque Al-Masjid al-Haram in Mecca (probably the most well-known site).  Built in 632 A.D., it is built over the site of Mohammed's tomb and house and is visited by many people every year.  The sheer numbers of people that frequent this place should put it high on your list to visit if you're in the region and looking for some history.  Other places to see in Medina include the Old Bazaar and the Madain Saleh Tombs, which some have called a smaller version of another famous site, Petra.

Getting to Medina might be a bit of a challenge, but airlines such as Saudia will get you there in good order.  Make sure to check visa and cultural restrictions before going.