The next day we had great ambitions to visit the Giant's Causeway, the Carrick-a-rede bridge, and end up north of Belfast near Cushendun.  Before leaving Londonderry/Derry, though, a quick shopping walk was planned though we didn't realize the day was set for festivities instead.  August 12th each year in Derry is the Apprentice Boys Parade, which marks the end of the siege of Derry in 1689.  Every shop was closed and all restaurants shuttered.  In fact, the marching bands walked right by our window: 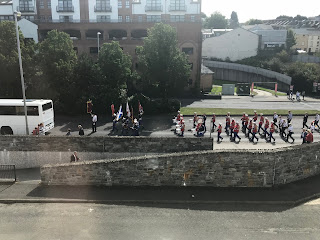 Luckily we were able to exit the city in good order and make our way toward the Giant's Causeway.  It's a bit of a walk to get to the rocks once you park but we didn't mind the exercise.  And the views: 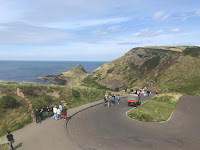 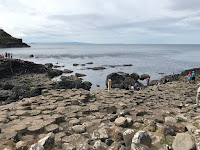 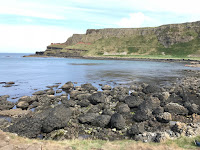 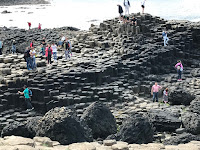 The bridge was up next on our list, though after checking we realized there were new processes in place for being able to see and walk it.  You have to reserve a block of time in advance - when we arrived it was going to be several hours to wait.  We opted to continue on but divert toward another option - the Dark Hedges!  I'm a Game of Thrones fan, and if you're familiar with the show the Hedges are famous for where Aria is leaving King's Landing at the end of Season 2 (Road to Harrenhal).  We did our best to take pictures that were close. 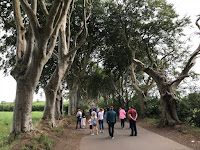 Our AirBnb was in the country and we found it fairly quickly based on the directions given.  It was a tight space for us to park the car but we liked the 'cottage' style rooms and a chance to decompress after a day of walking.

We stopped for dinner on the way to our place - the small town of Cushendun has a great place for a quick bit, Mary McBride's - perfect for light food, cider, and/or beer.