More clouds as we began our day today on the bus back to Otalora. This will be our longest day of the week, and we won't get back until almost midnight.

Our first session was with Juan Ignacio Aizpurua speaking about training and integration systems used in the cooperative. This is called 'ordezkari' in basque. I found his talk to be very engaging, and it covered a number of areas:

This groups works with new board members and aims for consistency across members for new four year terms. The additional workload on the board motivates people to take part in a new service area, and the process hopes that Social leaders are elected. Available jobs are a main motivation given the financial crisis/participation. Juan noted that "you're someone" in a cooperative job where you contribute directly. He also said that belonging to a company is a third motivation. I was mostly interested in his discussion on motivation, or what leads workers to want to work and participate. In particular, new board members form a team and work through a fear of being alone together. For them it may be hard to get into an unfamiliar role. The training team works to increase self-confidence and bring about a kind of personal transformation that will help them be successful. The listening skills of these individuals are not always developed and become an area of focus. Among these workers integrity and respect are most important for success...and they must put those into practice in everyday life. 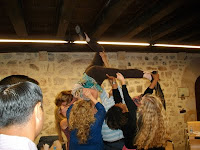 After another fine lunch, we heard from Jose Ma Larranaga about culture and values in Mondragon. He used a number-based system to speak about the relationships between people what they feel about the cooperative. The two group activities we did I think will be a highlight of the week for many. For the first we were split into two groups and asked to work as groups to achieve one task: have someone touch the ceiling with their feet. My group was the first to accomplish that. :) (the picture shown is the other group). Later our other activity put us in teams of four working as 'mini' co-ops - we had to try to all be successful and raise money using a x-y voting system. My group took the devil's-advocate role and ended up making the most, but the point was to see how much more successful we can be if we work together. The discussion that we generated trickled over into our lunch and dinner, and I think will be a main reflection topic after the trip is over. Does it send a mixed message for a cooperative of this type to say it is primarily focused on creating jobs when it's obvious that it must generate significant income in order to survive? That would seem to be more of capitalistic slant... 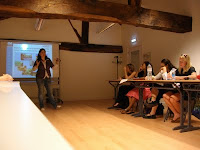 In our final session of the day we listened to Arantza Mongelos from Huhezi (at Mondragon University), the teaching school based on pedagogy and humanities. This school originally needed teachers who could teach in basque but now is has two main teaching areas: Education and AV Communication. They also grant post-secondary degrees in Education, innovation in Education, and multilingual/multicultural contexts. One stated goal is to double function in offering a program that educates as well as provides training. I asked about their field experience portion, and they are still working out details on instructor supervision and field placements. I think they have an opportunity to really set an example in the region for other universities looking to add a similar education program.

Our evening ended with a visit to Arantzazu, a monastery high up in the mountains and overlooking a lush green valley. We toured the buildings we could before wrapping up our final talk for the day. 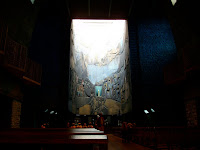 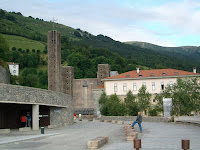 Soon we were back on the bus and winding our way down the mountain toward our special dinner at Onati in a "txoko" or a basque club. The food was amazing, and our hosts were very generous to take care of us. Can't wait to go back and sample the food again in the future! 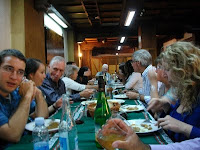 - Posted using BlogPress from my iPad
Posted by Rich Bakken at 11:10 PM