Our evening wrapped last night with some time talking to other hostel goers, and sharing some stories with a group from Canada and a guy who works for Microsoft. The main meeting area was full of backpackers, spirits, and good stories which made for a good end to the day. Then it was time to hit the bunks. 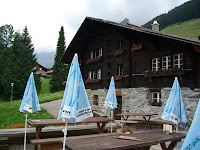 The room we were in was not large, but had five bunk bed sets. Jimmy and I had two bottom beds that weren't terrible. That is, until the snoring started around 2am. Now, I had earplugs and an eye shade on so I didnt hear any of this, but apparently one of the guys in the room had an issue and ended up waking everyone else. And they couldn't get the guy to stop. I woke up around six, showered, and got myself together - well rested. The hostel is very much a self-service place, so we had to take care of our sheets and linens before we left. No clouds on the peaks meant some great morning mountain pictures (more to come). Each part of the day seems to give a different viewing perspective.

After much debate we decided not to hike the Schilthorn. It was cloudy and would have been a 4.5 hr hike one way, and if it's not clear up there, why go. So we decided on the Northface Trail instead...winding toward Murren by way of a cog train from Allmendhubel. We stopped and tried to get a morning order of pommes frites from the restaurant before we started but they wouldn't serve us - they said they only had a day old egg quiche so we moved on. The trail left Allmendhubel and wound it's way up and over the side of the mountain, through cow pastures and rock placements, finally ending itself back on the other side of Murren. I'd like to think that we solved all of our remaining issues in our PhD programs as we walked...consulted a few cows and sheep along the way too. Three hours later we were back to Gimmelwald and on our way back down the mountain to Stechelberg.

The trains were right on time as usual to get us to Zurich, and after trucking it up the hills and checking in at the Hotel Sunnehus, we left for downtown and food. It was at that time that my feet told me they weren't doing so hot. All of the mountain hiking did a number on my heels especially...what's a few blisters, right?

We managed to find a place for some gelato and apfelstrudel, and now will crash - we leave tomorrow mid-afternoon.

- Posted using BlogPress from my iPhone
Posted by Rich Bakken at 5:17 AM