We took our time waking up knowing we were so close to Dublin and the surrounding area.  I took a quick pic of the map to show where we were...fun to be out in the country.

Rather than go directly into the city, we decided to try some antiquing before our planned activities in the afternoon evening (including seeing a show at the Abbey Theatre!).  After much research, Shannon found a desired place to visit in Bray.  So off we went to the seaside town. Unfortunately...we quickly discovered that the shop was closed. Of the permanent variety. Since we were already in town, we decided to visit the local church and again came away impressed with the overall architecture. 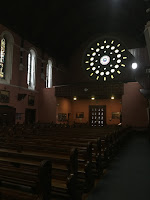 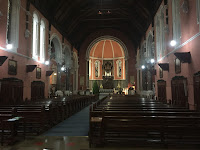 For lunch we decided on a local place, Ocean Bar and Grill.  We also were able to take some great photos of the Irish Sea since the rain decided to hold off.  The food overall was excellent. 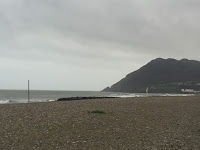 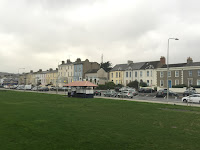 Soon we were back on the road and needed to check in to our hotel before heading back into Dublin.  The place for our last night in Ireland?  Clontarf Castle.  The pics speak for themselves. 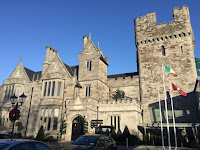 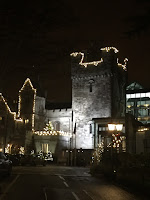 The rain and wind were back but we were not about to be stopped. We made one final trip to Penneys and then it was on to the show. The Abbey Theatre had a preview night on tap for the Bernard Shaw production of "You Never Can Tell", and we couldn't pass that up. An added bonus was seeing Nick Dunning in the cast (also well known for his role on The Tudors).  It was a hilarious show and we had a very enjoyable time.  To offer a quote, "Wherrrrrre's Finch?!"  (and yes, that is a small moat of water around the edge of the stage) 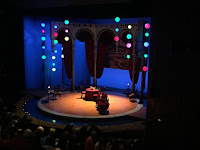 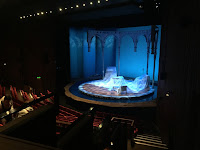 Afterward we took the 130 bus back to Clontarf and began our final packing prior to departure.  Hard to believe our fantastic trip was almost complete!