Did I mention in the last post that we were able to catch the Packers game via Internet stream after our flight finally landed and we got to the Hyatt?  It was a sad massacre of a game, but it felt kind of cool to be able to listen to Wayne and Larry in Istanbul on Thanksgiving...how many people can say they did that?

For Day #2, there was a definite plan of attack given the short amount of time remaining in our schedule.  Having investigated the train system the day before we were much more prepared and ready to go the following morning.  We were quickly out the door and to Taksim station...only problem was that we were so confident we knew what we were doing we accidently boarded the funicular twice.  Lesson learned: calm yourself down before jumping on the first train you see.  After that bit of fun, we were off on the T1 and our first stop: The Blue Mosque. 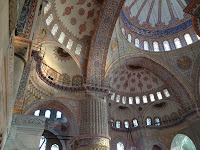 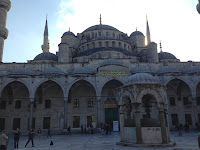 The line was already a bit long by the time we got to the entrance, but our efforts to join part of an already large touring group were successful and we skipped ahead of the line...sneaky, I know.  Upon entering the Mosque you must remove your shoes and if you are a female, you need to have your head covered out of respect.  Once that is accomplished in the small anteroom near the entrance, you find yourself in the main part of the building - and witnessing an amazing view of the tile and grandeur that is the Blue Mosque. 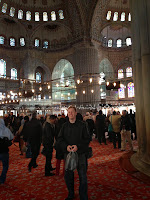 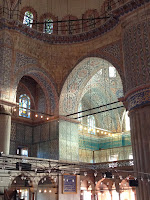 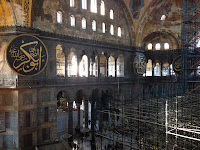 After leaving the main room and putting our shoes back on, the Hagia Sophia was next on the list - it is located right next door to the Blue Mosque so it was a short walk.  The line was not nearly as long to get tickets, so after waiting about 10 minutes we were in and admiring the history and culture of a building some consider a Wonder of the World.  I found the Roman history portion fascinating - walking in similar corridors as Emperor Justinian made me appreciate the long history and changes that have taken place in the building. The tiled frescoes were also a sight to be seen, despite some scaffolding and restoration work being done in the main hall. 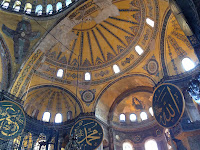 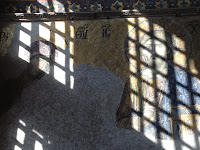 We found lunch after the Hagia Sophia at a small restaurant near the entrance and down the train line - a kebap and cafe that had pretty good lamb.

Our final stop was the Topkapi Palace - we knew there wasn't enough time to visit all parts of it, so we chose to focus on the Hagia Irene and the Archeology Museum buildings near the entrance.  Our patience was tested when a short entrance line to the museum took almost a half hour to get going (for no reason that could be seen), but we were soon in and taking a look at the many artifacts, including the Sarcophagus of Alexander the Great and many artifacts from the city of Troy. 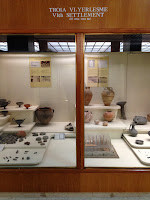 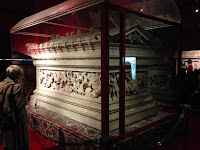 Upon finishing up at the Palace, it was time to head back, find some food, and enjoy the final evening in Istanbul.  I even got duped by a shoeshine guy right outside of the hotel - have to experience it all!