I'm not sure what it is exactly about Istanbul, but I found myself being transported back in time while viewing a modern city still trying to make up its mind about what it wants to be.  I don't think I've had a similar feeling since my very first trip to Rome, where the ruins are all around you at the same the cars honk and speed past. 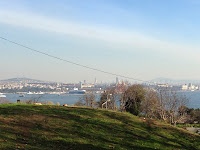 After getting proper rest from a long day of flying (separate posts will be forthcoming on lodging and food), it was out and about to figure out the mass transit in Istanbul.  This actually turned out to be much easier than anticipated, as the signage is fairly good in each station.  And when all else fails you can just follow the bustling crowd.  We never did find the akbil kiosk - either was so obvious that it couldn't be found or we weren't really looking in the right spot.  In any case procuring tokens from the vending machine was easy and soon we were off down the funicular to transfer to the Tram system T1.  Next trip an investment in an Istanbul Kart will be first on the list to save cost.  The tram is very efficient and stops near all of the major sights in the old part of the city.  Crossing the Galata Bridge was a highlight and soon we were off to experience all the Grand Bazaar had to offer.  Including all of the people and vendors wanting your every attention. 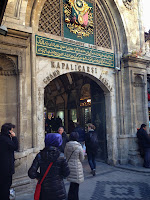 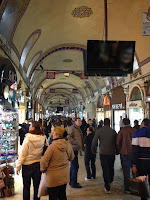 The Bazaar itself is monstrous and a lesson in sensory mastery if you're not accustomed to the hustle and bustle.  It reminded me a lot of visiting Souq Waqif in Qatar and the haggling was eerily similar.  You always have to have a suspicious eye ready to take on whatever bargain you want to discover, and the vendors in the Grand Bazaar do not hold back.  I think we were very successful in haggling for the things we procured and look forward to a return trip to the areas we passed.

Soon after we made an effort to reach the Hagia Sophia, but realized upon arrival that we had the hours wrong for entrance.  The setting sun, though, provided an awesome camera opportunity: 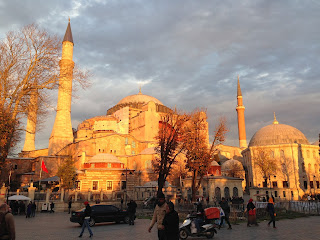 We wouldn't make the same mistake for Day 2...