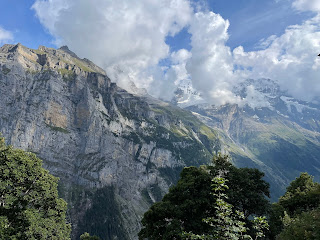 Greetings from 38,000 feet over northern Missouri!  I'm enroute back to SFO after a very successful Labor Day weekend trip to Switzerland.  It had been 643 days since I was last overseas, and for a time I wondered if this trip would also go due to Covid and changing travel status of the EU countries.  Switzerland's requirements, however, did not change and we were able to depart (though not without a few different unexpected impacts):

1. The remnants of hurricane Ida caused severe flooding all over New England; it didn't change my flight from SFO-EWR though did cause train cancellations affecting Heather.

2. When Amtrak cancelled, the next choice was a bus from Boston to Newark via Penn Station.  Except that the severe flooding caused road closures all over NYC which rerouted the bus.  Not helpful for on-time checkin!

3. After the bus arrived near Penn, Uber was the next best choice given the road closures - not cheap though more reliable.  However the cancellations caused severe check-in backups which also necessitated a more engaged exchange with agents to make sure boarding passes were in hand on-time.

4. My effort to use PlusPoints to upgrade was only partially successful - when I called United back after landing to confirm the points use and HB's spot on the upgrade list, the 1K agents changed the ticket block making her go from #1 to #10.  I called at least 4 times to the 1K desk, went round with the gate agents, and after boarding started was no further in restoring the upgrade list.  I don't think I've ever been as frustrated as I was on the phone with 1K agents who insisted on 'policy' - policy won't fix it, just restore what was there originally!  Instead of Polaris, they were able to confirm Premium Plus last minute.

5. Due to crew misconnects, we departed late and had a delayed arrival of almost 2 hours - not a dealbreaker.

Murren was absolutely amazing - the weather held each day and we got some great hiking in on the Northface Trail. 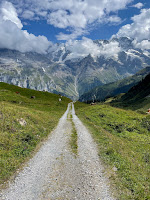 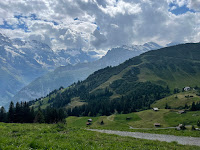 If Covid testing is required to return to the United States, I absolutely recommend the Binax eMed product and Navica app - no wait times and test results in about 20 minutes online (plus it's CDC approved). I ordered kits in advance and brought backups just in case, no issues with carryon's.

We had confirmed seats in Polaris Business on the way home - great value for the PlusPoints upgrades (a one way ticket in that cabin was priced at over $7000!).  Since I used previous cancelled travel credit and points, I was happy with another low-cost trip.

One odd note on arrival back in the US at Newark - no one confirmed the negative Covid test.  It's a requirement to have it on arrival or you're not allowed to enter, and it was confusing that it wasn't checked once?

Everything was very smooth in Switzerland - trains were on time, everyone was masked, there were not typical crowds in the train station, restaurants had plenty of outdoor seating available, and most businesses were open.

I hope that access continues to be consistent through the fall - I'm due to be back in Geneva for a conference in October.