I haven't written one of these in quite some time, so now that I'm off the road it's time to start again!

The Nasir ol Molk Mosque, with construction occurring in 1888, is also known as the Pink Mosque due to the tiles that were used as part of its creation.  Architecture Magazine references the "Panj Kāse concave design" that creates a kaleidoscope effect when visiting the site: 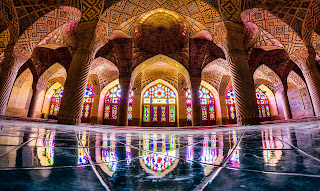 The Mosque is located in Shiraz, which served as the capital of Iran in the 18th century.  Visiting the Mosque may be challenging for some given current access challenges to this particular region.  The best time to visit is likely in spring when temperatures are more favorable.  One site with possible options for both travel and lodging is 1stQuest.  Your best bet is to fly into Shiraz and a number of cities have connections including Doha, Istanbul, and Dubai.