Our arrival to Male was an adventure (although we knew that coming in having done a bit of research).  To get to the Park Hyatt atoll, your journey includes the flight to Male, a connector flight on Maldivian Air to Kooddoo, and then a speedboat transfer to the Gaafu Alifu Atoll about 40 minutes away.  The Hyatt arranges the transfers in total before you arrive so you don't have to worry about it when you get there.

I was curious how this would all go - and as I suspected we had an adventure!

Our arrival to Male was ontime and upon landing we met our greeter who took us to the arrivals lounge to wait for our connection flight.  Due to low clouds and rain we were delayed about 1.5 hours.  So...we got to experience the very 'purple' lounge (which also didn't smell the best): 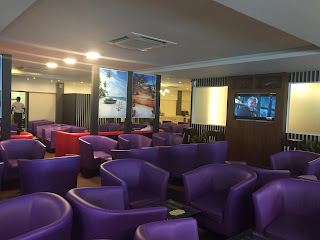 Food and wifi were available as well as drinks so the time passed by though we were very ready to get going after such a long flight from Sydney.

Soon our greeter came to take us to the plane - a small Q200 turboprop.  Boarding was fast and our hand luggage was able to fit under the seat behind us as the plane was not full. Soon we were off - a fairly quick 1 hr flight.

Landing to Kooddoo we saw that it was raining and encountered a pretty stiff wind while being driven to the boat landing from the terminal.  We were the only two on the cart for the transfer, which also happened to be covered tight with plastic to keep the rain out.

Our boat ride from Kooddoo to the Atoll was not as smooth.

It took almost 50 minutes at high engine speed in what I can only describe as the roughest sea I've ever been on.  In my estimation the waves had to be 6-10' since we were constantly going up and slamming down in the low part of the swells.  The attendants tried to make this a typical transfer, offering us a cocktail drink and parfait before we left but that was soon spilled and not consumed once we felt what we were in.  I must admit I made a small prayer while we were going though I knew we must be ok since the Maldivians driving weren't even hanging on to anything.  If they're not worried, I shouldn't be!

We arrived to the Park Hyatt in the rough sea and since the boat was still in such swells at the landing we had to wait until upswells for three guys to launch us out of the boat onto the deck where three other guys caught us and our luggage.  They had a cart waiting for us which took us to our room and we had a modified checkin since we were the last to arrive that evening.  No upgrades possible since the property was full but our room was amazing.  Sleep came quickly - we made it!

Some arrival pics as we made it to Male: 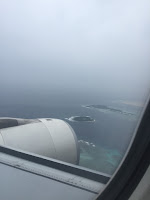 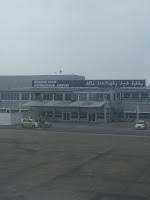