Here's the part where the trip gets interesting...Jakarta.  Or, as I found out, the proper way to say it is sza-kar-TA, emphasis on the last syllable.

My departure from Bangkok was slightly delayed in the morning due to heavy rains.  The hotel stood up well - I got about 4-5 hours of sleep and after a short counter wait I was off to the gate for Thai Airways 433...another new airline to try on my adventure!  Overall I can't complain - the seats were standard for economy on the A330 and service was overall good.  After landing Jakarta things got interesting.

For starters, the arrival area is not well marked.  And it's warm.  Borderline hot. If the AC was on I couldn't tell.  But since I knew I was a transit passenger I walked toward the labeled 'transit' area signs instead of the visa/immigration area.  And was promptly stopped short of the moving walkway by a guy who wanted to see my ticket info.  I had done my research and knew that IATA and Indonesia are in agreement on transit passengers so I really didn't think I'd have an issue.  Boy was I wrong.

An arrivals staffer proceeded to hold me up and question me about all parts of my trip. Where did I come from?  What flight?  Where am I going?  Why did I fly Thai Airways?  (I had receipts for all of my bookings, but the theme of the afternoon was that no one understood why I took two different airlines to connect).  While I was standing there, my seatmate from the Thai Airways flight (who also happened to be an editor of one of the main Jakarta newspapers) stopped in and tried to intervene.  I caught most of what was being said as they poured over my receipts but it wasn't good.  In the end, though, I was given the option of waiting in the Garuda Indonesian Lounge area until 9pm in order to transit.  Not exactly ideal but I took it and camped out.

I wasn't going to let that stop me.  After 2 hours the first guy left and two girls replaced him. Thought I'd give it a try again. This time I was told I had to wait until 8 hours before and then I could transit.  So...back to the Lounge to wait an hour.  By then the two girls were gone and an immigration officer was now on duty.  The third time definitely was not the charm.

After explaining and showing my tickets, this officer said to follow him and off we went to the immigration office...where four officers proceeded to pour over my info and try to figure out why I was transiting with so much time in between and with different airlines.  The main guy asked me pointed questions - and when I tried to explain why I should be able to transit, he wasn't having any of it.  He told me I was the only person he's heard of to try and transit like this (right).  I explained that I had called and done my research on transiting, but I knew I lost my argument when he proclaimed, "I don't care what the rules are or what it says, this is my country".  Yep - done.  I waited a bit more but finally relented and went to do (and pay) the immigration into Indonesia.  After finding a place to take my credit card, I was told to come back to the office where they took my passport for 10 minutes and had to personally stamp me in.  Soon after I was off through baggage claim and into Indonesia...only to try and re-enter and get back into the airport lounge areas.  I was hot, tired, hungry, and thirsty...all I wanted was water.

And I couldn't even get that.

They have a Coffee Bean, Starbucks, and even an A&W in the front area of CGK.  But little did I know that none of the places take a credit card - only local currency (of which I had none).  Luckily I had bought a $50 bill along and rather than use my debit card in one of their machines, I was able to change that into local currency and could eat and get a drink.  I had a bunch of hours to wait so I took my time and eventually made it back into the main check in area, where I waited in another long line to get my boarding passes.  I then changed my money back into US Dollars (and five Euros) and proceeded to immigration again where I then paid the departure tax.  Lesson learned...bring currency or be prepared to change dollars. 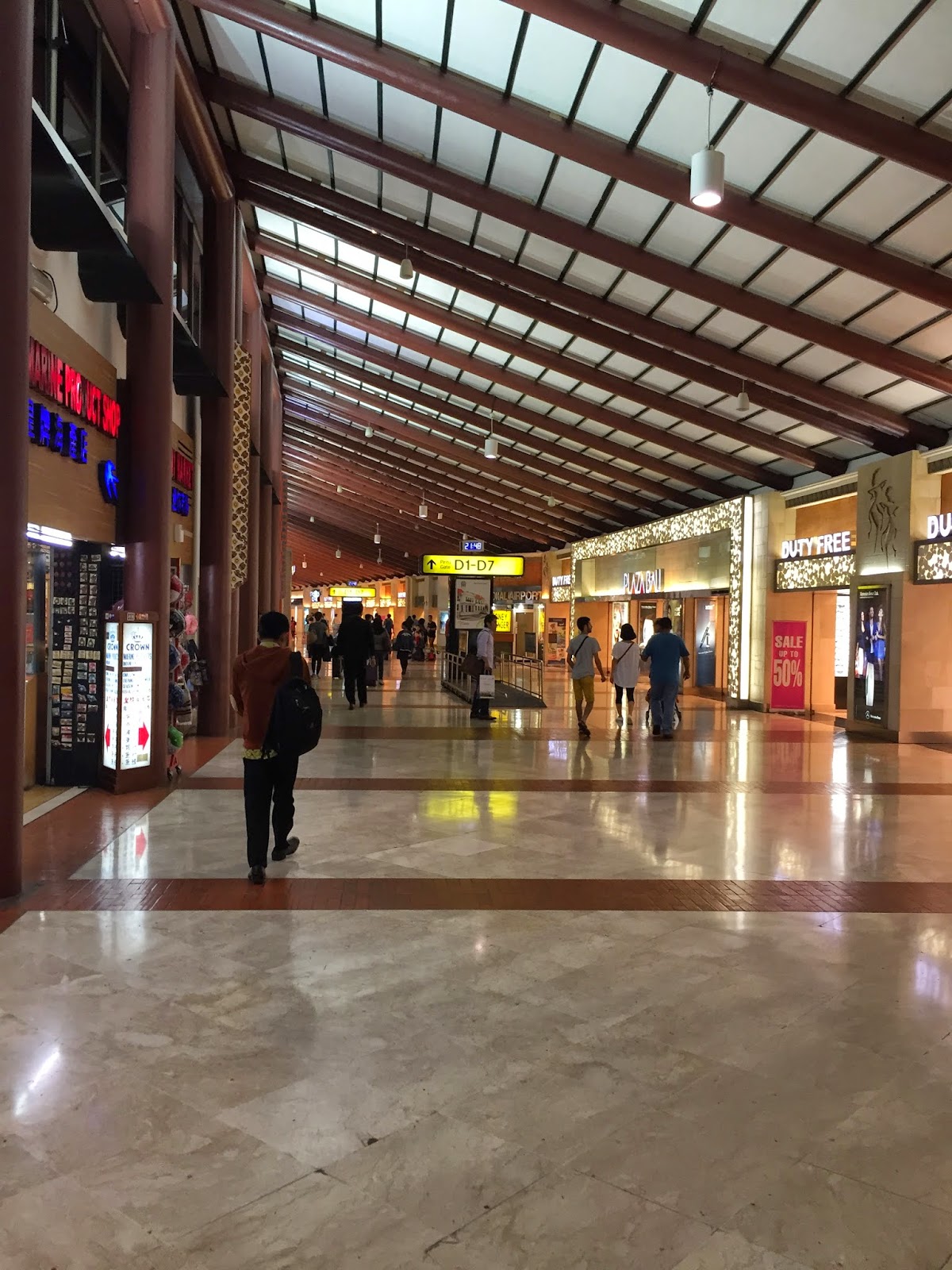 After going through security I was back in the main terminal - amazing how many high end shops they have compared to the small kiosks in the front.

I was ready to fly on to Hong Kong.  After a short wait and a bit of Internet from Starbucks, I was off to the gate and my next new airline - Cathay Pacific.  We had another A330 for this segment and I must say that Cathay does it right.  Nice seats, excellent entertainment, and food is top notch.  They even left food at my seat when I fell asleep so I could wake up and eat.  Can't wait to try them on a longer transpacific flight!  Other than my seatmate almost sleeping on my shoulder it was a smooth flight into Hong Kong.