Another churn, another success

I wasn't planning on having another credit card churn today, but it happened nonetheless.

Word had it that the Southwest Premier personal card was going away, along with its 50,000 point bonus after $2000 spend in 3 months.  Now, truth be told, I don't fly Southwest much.  In fact, it's less than 1% of the flying I do.  But...Wanna Get Away fares are reasonable to many places on the West Coast, and now that Airtran is in the fold, some international destinations as well.  And, I could use the points for staging to get to other airports when deals pop up.  Here were the terms: 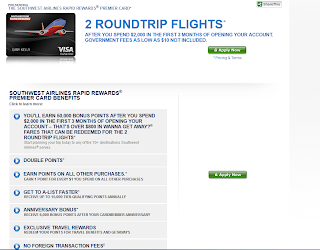 So...I took the chance and applied.  I didn't get immediately approved, but "waitlisted" - I picked up the phone, dialed the Reconsideration line and got a very kind agent who found my application, and asked if I wanted to move around some of my credit from other cards (which of course I was happy to do).  And Wah-la!  Approval secured.

Bring on those points!