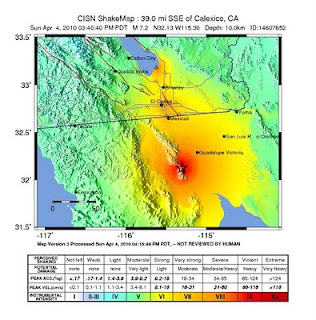 If you haven't seen or heard the news, southern California just experienced the effects of a 7.2 magnitude earthquake that originated in northern Mexico, just to the south of Mexicali (which incidentally is also close to SDSU's Imperial Valley Campus in Calexico and third campus in Brawley).

This officially was my first earthquake that I've felt, and Karl had the pleasure of being on Skype with me when the whole building started to shake. It actually shook so much for so long that my cuckoo clock on the wall started itself. Gotta admit it was a little unnerving to feel it and just sit there as the walls are rolling around you. I actually wasn't sure what to do at first...Karl asked if there was something I should be doing, and I just blurbed out that I had no idea. Guess I'll add it to my list of things to read up on pretty quickly.

Anyway, check out the map above for the intensity San Diego felt - we are in the moderate category.
Posted by Rich Bakken at 5:48 PM